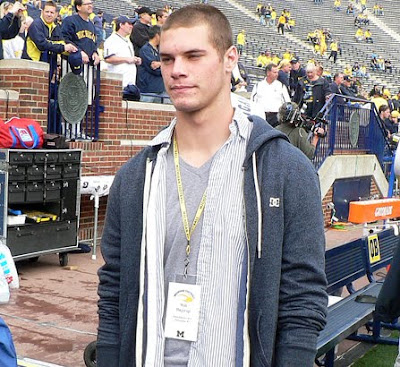 Hagerup was the #3 kicker in the country according to Rivals and played in the Army All-American Game back in January. He steps into a good situation for a freshman punter. Michigan’s most beloved punter, Zoltan Mesko, graduated to the New England Patriots and there are zero other punters on the roster. It was an ideal situation for a freshman looking to play immediately, and Hagerup was the only specialist that Michigan offered in the entire class. Luckily for the Wolverines, their one offer at the position was accepted.

The importance of the punter position is underrated by many football fans, especially when it comes to consistency. Mesko improved throughout his five years at Michigan, averaging just over 41 yards per punt in his redshirt freshman and redshirt sophomore years before improving to 44.5 yards on average as a senior. More importantly, though, his kicks were often booted high in the sky, allowing coverage teams to converge on the returner. And perhaps even more importantly, Mesko rarely suffered through shanked punts.

Mesko was the first punter/kicker selected in the 2010 NFL Draft, so it’s unlikely to expect the same kind of success for Hagerup. And as mentioned above, Mesko had the freedom to redshirt as a freshman. That’s not the case with Hagerup, whose competition for the job is virtually nil. It’s his job to lose, and he has reportedly looked good thus far in fall camp. With a new placekicker and a new punter – both of whom will likely be freshmen – Michigan’s special teams will probably be shaky in 2010, but Hagerup should provide a small iota of stability in comparison.