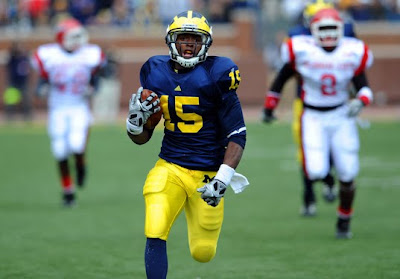 Headed into the 2009 season, it seemed that Cox was going to be an afterthought. Seniors Carlos Brown, Kevin Grady, and Brandon Minor were recruited by Lloyd Carr and would almost certainly get the majority of the carries. Junior Michael Shaw, freshman Vincent Smith, and freshman Fitzgerald Toussaint all signed with a Rodriguez-led Michigan. Cox was the only non-senior who had signed with Lloyd Carr, and many thought that he wouldn’t fit Rodriguez’s system. Cox wasn’t small and fast like Noel Devine, and he wasn’t a giant bruiser like Kay-Jay Harris. But practice reports said that he looked like a slightly smaller version of Brandon Minor, and that seemed to be the most accurate description once the 2009 season played out. Fans’ first sight of Cox saw him punishing Eastern Michigan tacklers for 24 yards on his first carry, and he added an impressive 57-yard touchdown run a few weeks later against Delaware State.

In the spring of 2010, the battle to replace Minor and Brown started to heat up. There can be a case made for several players. Shaw is extremely fast and shifty, but he can’t stay healthy or break tackles and has questionable vision (he also might be academically ineligible for the season). Smith is shifty and has good hands, but is small and coming off a torn ACL. Toussaint was a highly touted recruit and possesses the best all-around skills, but is coming off a season-ending injury and didn’t see any game action in 2009.

In my mind, though, there are very few questions about Cox. He has good size and speed. He runs hard. He hasn’t suffered any significant injuries. There is but one question, really . . . but it’s a huge one: Does Cox know what he’s doing? He suffers brain farts occasionally, and that may have been to been to blame for a fumbled exchange in the spring game, although it should not be overlooked that early enrollee Devin Gardner was on the other end of the handoff. He looks silly at times, but he also runs for a bunch of yards – the 24-yarder against EMU, the 57-yarder against DSU, and a 22-yard TD against Michigan in the spring game. It’s an extremely small sample size, but Cox looks better on paper than any other back on the roster. That’s good enough for me.