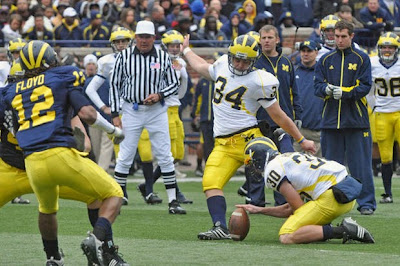 Not many people expected Gibbons to redshirt in 2009. He stepped into a situation with one oft-injured kicker (Bryan Wright) and a bunch of walk-ons. But despite being the #8 ranked kicker in the 2009 recruiting class, he sat for the entire year and watched fifth-year walk-on Jason Olesnavage handle the placekicking duties. Gibbons definitely has leg strength; in his senior year of high school, 93% of his kickoffs were touchbacks and he had 7 field goals of 40+ yards, including a long of 52. However, reports of inaccuracy and inconsistency have been rampant, and Gibbons is fighting several former walk-ons for the kicking job again this year.

I’m not sure what will happen with Gibbons. He has been erratic, and walk-on kickers make an impact at various schools around the country every single year. I would not be surprised to see him lose the job, so this #18 ranking encompasses all the kickers, in a way. I think Michigan’s offense will be high-powered enough that field goals won’t be a premium mode of scoring points in most games. Games in 2010 aren’t going to be won or lost with scores of 17-14 or 14-13. These are going to be high scoring affairs, and even though I’m sure Michigan will lose a few games, it will mostly be due to a questionable defense and not entirely the kicking woes that are sure to surface.

And hey, the lower my expectations are, the more likely I am to be pleasantly surprised.

Prediction for 2010: Gibbons will be the kickoff specialist; a walk-on will be the placekicker

Gibbons was the leading vote-getter with 20% of the tally.