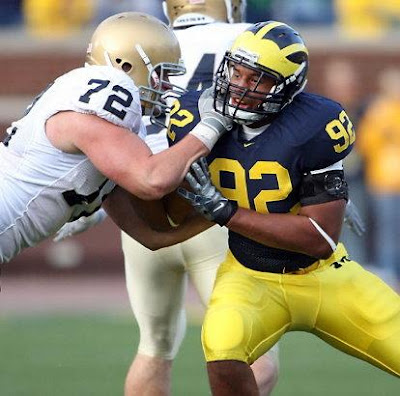 This might be my most controversial choice for starter, and he also has the potential to be my “most overrated” player by the end of the season. Banks was a backup defensive lineman in 2009, seeing time at the 3-tech defensive tackle position that Ryan Van Bergen occupied most of the time. He only made 5 tackles in a solid but unspectacular campaign and couldn’t distance himself from Renaldo Sagesse, another backup DT. But Banks did earn praise from defensive line coach Bruce Tall in the spring; the coach called Banks’ pass rushing moves “textbook,” which might not be the best compliment, but it might be good enough.

There’s going to be a weak link along the defensive line, especially if Michigan fans are looking for a Brandon Graham-like superstar. Ryan Van Bergen will be solid at 5-tech defensive end. Mike Martin will be very good, whether he’s playing nose tackle or 3-tech DT. If William Campbell starts at nose tackle, his conditioning and technique will likely be a weakness. If Banks starts at DT, his strength and overall athleticism will make him the least heralded. He’s not a superstar in the making, but if he can hold his ground as well as Van Bergen did at DT in 2009 (40 tackles, 5 sacks), Michigan fans should be happy. Campbell will get more playing time this year than last, and that might cut into the minutes Greg Banks sees. We’ll see a slight drop-off at the DT position this year, but hopefully it will be muted by improved playing from the linebackers.