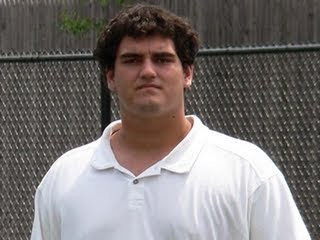 Michigan received its tenth commitment of the Class of 2011 Wednesday, getting a pledge from Tampa offensive lineman Tony Posada. Posada is a 6’5″, 315 lb. offensive tackle from Plant High School, which is also the home of James Wilder, Jr., a highly touted running back (Michigan has offered Wilder, but the interest seems unrequited). He chose the Wolverines over offers from Illinois, Kansas, Missouri, South Florida, and Texas Tech, among others. Posada is unranked by Rivals and a 3-star to both Scout and ESPN.

I haven’t seen much of Posada, other than the few glimpses in the video below. He has no highlight videos anywhere on the internet that I have found, so I’m basing all of my opinions on that slice of video and what I’ve gathered from articles and pictures.

Although he’s ranked as an offensive tackle by all three recruiting services, I think Posada’s future is at offensive guard. I’m a rebel like that. One reason is that Posada is 6’5″ (or 6’6″, depending on whom you believe). If you subtract an inch because usually those recruiting sites lie, that means he’s actually 6’4″ or 6’5″. Looking at the heights and body types of Michigan’s current tackles and tackle recruits, they’re all taller and leaner. Taylor Lewan is 6’8″; Perry Dorrestein, Michael Schofield, and recruit Jake Fisher are 6’7″; the shortest of the bunch is Mark Huyge at 6’6″. If Posada is indeed 315 lbs., he’s already heavier than all but Dorrestein (321 lbs.), but his body type suggests a future at guard.

One of the things I have been most impressed with about Michigan has been the development of the offensive line. Guys who couldn’t cut it were quickly run out of the program (Kurt Wermers, Dann O’Neill), and the remaining members of the offensive line seem to be coming along nicely. So while Posada lacks an extremely impressive offer list, I’m beginning to trust more and more the offensive line offers that Rodriguez and offensive line coach Greg Frey extend.

As for the rest of the 2011 class, there are eight remaining spots with the departure of Justin Turner. Michigan will likely take at least one more offensive lineman, possibly two. I expect at least one wide receiver, one running back, one tight end, one defensive tackle, one linebacker, one cornerback, and one safety. It should be a matter of filling out the team right now, not necessarily taking as many stars as possible. With all of the scholarships devoted to running backs and defensive backs, Michigan is running short on scholarship linebackers and tight ends, in particular.