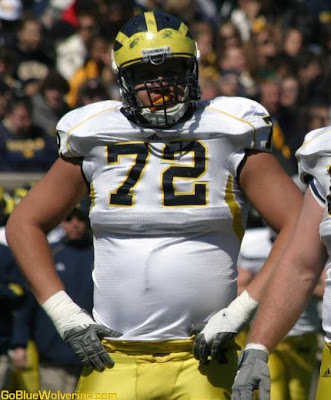 Huyge battled Perry Dorrestein for the right tackle job in 2009, finally winning the job in fall camp. He started the season there, but with the injury to center David Molk and the subsequent David Moosman move from guard to center, Huyge was deemed a decent fit at right guard. However, his starting role was eventually eliminated, as then-redshirt freshman Patrick Omameh beat him out at guard and Dorrestein had entrenched himself at right tackle. Huyge watched the last couple games from the bench, aside from some special teams duty.

With the graduation of two senior offensive linemen (Moosman and left tackle Mark Ortmann), the opportunity for Huyge to become a starter is there for the taking once again. Omameh will almost surely start at guard once again, but it’s a four-way battle for the tackle positions between Huyge, Dorrestein, Taylor Lewan, and Michael Schofield. Huyge’s most significant challenge will most likely come from Schofield, but the chances Schofield beats out the redshirt junior are very slim. Until or unless an injury occurs, Huyge is your starting right tackle in 2010. He’s not a great blocker in either phase of the game, but Rodriguez is probably in a make-or-break year, and he probably can’t entrust the tackle positions to redshirt freshmen.