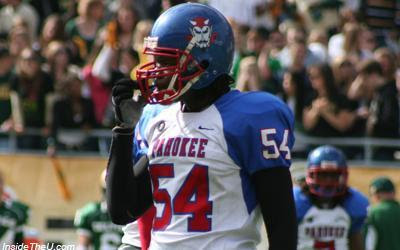 The 2010 football roster was released on Monday, and there are several interesting notes. Going down the list numerically . . .

Freshman safety Marvin Robinson is #3 and listed at 6’2″, 200 lbs. Not only was Troy Woolfolk impressed with his play at safety during summer 7-on-7s, but for all those people who thought he would bulk up to play linebacker . . . 200 lbs. hardly screams for a position change.

Senior linebacker Jonas Mouton is 240 lbs. now. Last year he was listed at 228. He’s not the only linebacker who bulked up, so that’s clearly a directive from the coaches and training staff.

Freshman cornerback Courtney Avery is #9 and listed at 5’11”, 167 lbs. He has apparently been working hard this summer, but that’s not much weight to be spread out across a 5’11” frame.

Junior running back Michael Shaw packed on 6 lbs. and is up to 187.

Freshman cornerback Cullen Christian is #24 and listed at 6’0″, 187 lbs. That seems like a perfect size to get some playing time this year.

Redshirt sophomore middle linebacker Kenny Demens is 250 lbs. now. And if you’ve seen any new pictures of him, he’s jacked.

Redshirt freshman middle linebacker Isaiah Bell is 245 lbs. now, up from 237 in the spring. He was a free safety and about 205-210 coming out of high school, so that’s some impressive weight gain. Hooray for chocolate milk.

Redshirt freshman kicker Brendan Gibbons is 227 lbs. There were reports that he had been up to about 245.

Freshman linebacker Davion Rogers is #38 and listed at 6’6″, 200 lbs. Maybe he can play small forward for our basketball team, too.

Freshman Kenny Wilkins is #41 and listed at 6’3″, 262 lbs. Hopefully that’s good weight, and I’m assuming it is because he has a reputation for being a gym rat. He’s also listed as a defensive end, despite some people’s thoughts that he would play Craig Roh’s linebacker position.

Senior Mark Moundros (a permanent captain for this season) is listed as a “FB/LB,” the only player on the team with two positions listed.

Senior middle linebacker Obi Ezeh is up to 250 lbs.

Redshirt junior center David Molk is listed at 285 lbs., up fifteen from the 2009 season.

Freshman defensive tackle Richard Ash is #54 and listed at 6’3″, 320 lbs. That’s a significant weight gain for someone who was 240 lbs. as a junior and listed at 263 lbs. on his recruiting profiles. That much weight gain can’t be good weight.

Freshman defensive end Jibreel Black is #55 and listed at 6’2″, 258 lbs. Expect to see him on the field this fall.

Sophomore defensive tackle William Campbell has gone through quite a transition. He came in at a reported 330 lbs., got all the way down to 318, and is now listed at 333 lbs. It sounds like the training staff had to melt off some of the flab and turn it into muscle . . . hopefully.

The redshirt freshmen offensve linemen have all put on significant weight. Taylor Lewan is 294, Michael Schofield is 293, and Quinton Washington is now 315. That should make them viable options to play this fall.

Senior tight end Martell Webb is up to 255 lbs.

Junior tight end Kevin Koger is up to 255 lbs.

Redshirt sophomore tight end Brandon Moore is up to 250 lbs.

Freshman Jordan Paskorz is #94 and listed at 6’3″, 242 lbs. He’s also listed as a defensive end, which is where someone with his hip stiffness belongs.

Freshman Terry Talbott is #96 and listed at 6’3″, 248 lbs. He’s destined for a redshirt, especially because he’s listed at defensive tackle, not defensive end.

Senior Adam Patterson is still listed as a defensive end, despite the fact that he got snaps at nose tackle in the spring.