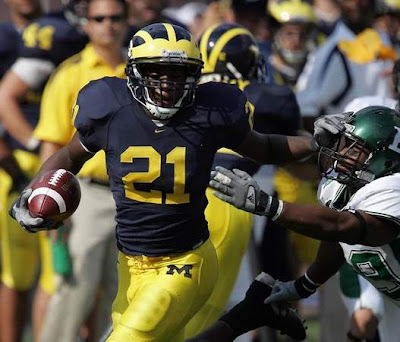 Okay, I was duped. I thought that the arrival of Tate Forcier would mean more passes thrown to the outside receivers. I predicted that Hemingway would be 2009’s breakout offensive player (in retrospect, Roy Roundtree should probably have been given that title). Even the opening game against WMU seemed to bode well for my prediction skills, when he caught 5 balls for 103 yards and 2 touchdowns. Unfortunately, Hemingway was still slow (10 punt returns for 86 yards, an 8.6 yard average) and slightly injury prone, dealing with nagging injuries much of the season.

At 227 lbs., Hemingway is the heaviest receiver in my Michigan memory. He reportedly has great athleticism when going after the ball and getting it at its highest point, but the aforementioned “slowness” is a bit of a problem sometimes. No longer do I see him as a potential breakout player, not with Denard Robinson leading the charge to start at quarterback and Roundtree emerging at wideout. Hopefully Hemingway can block in the running game and make occasional plays in the passing game, but Robinson and the running backs should lead a powerful, explosive, run-oriented offense in 2010. I think Hemingway missed his small window of opportunity to step out front and become a star, but he has two years to prove me wrong.