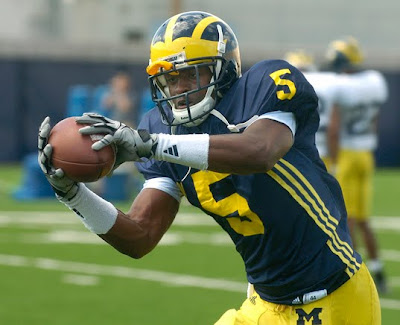 Name: Vladimir Emilien
Height: 6’1″
Weight: 202 lbs.
High school: Plantation High School in Lauderhill, FL
Position: Safety
Class: Sophomore
Jersey number: #5
Last year: I ranked him #33 and said he’d have to contribute as one of only a few scholarship safeties. He played in five games, mostly on special teams, and made 1 tackle.

Emilien made an inauspicious debut to most Michigan fans, who first noticed him when Carlos Brown outran him for a long touchdown in the 2009 spring game. After having torn an ACL prior to his senior high school season and missing every game, he enrolled last January for spring practices. So not only was he just recently recovered from an ACL tear, but weakside linebacker Kevin Leach failed to fill his gap and hung Emilien out to dry against Brown, whose speed was superior to most Big Ten players, let alone a should-be-high-schooler with a bum knee. It was assumed by many (including me) that Emilien would contribute in 2009, but he should have redshirted. He wasted a year of eligibility for 1 tackle and played in less than half the games.

This spring Emilien sprained his knee early during practices, but returned just in time to be outrun by Roy Roundtree on a 97-yard TD pass in the spring game. I’m not sure that we’ve seen Emilien at full speed yet, but hopefully he can turn on the jets sometime soon. Spring buzz makes it seem that Cameron Gordon is standing between #5 and a starting free safety job this season. Emilien does offer some versatility, as he has stated that he can play all three safety positions. While he will likely remain in the two-deep at free safety this fall, he could potentially wedge himself into some playing time at Bandit if an injury or two occurs. I doubt you’ll see him starting any games this fall, but he could be a key backup if receiver-turned-safety Gordon falters. Nearly two years removed from his torn ACL, he should be nearing full speed once again. Hopefully his full speed is fast enough to track down Big Ten receivers and running backs.