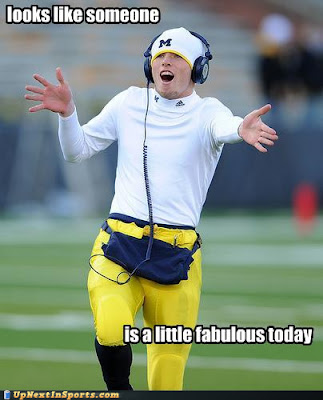 The hype for Forcier last season was amazing. It approximated the hype this season for Denard Robinson. Forcier was a highly touted recruit at a position of need with the pedigree and polish (if not the size) to turn the whole program around after a nightmarish 2008 season for Michigan. Things started off with a bang, as Forcier threw 3 touchdowns against Western Michigan in his first game and won the first four games of the season. His comeback victory against Indiana was followed by a near-comeback against MSU, but the 4-0 start to the season quickly devolved as Forcier went 1-7 as a starter down the stretch.

The offseason was somewhat tumultuous for Forcier. He had to recover from a bum shoulder that he injured late in the season. Then Denard Robinson took great strides in spring practices, earning rave reviews and seemingly relegating Forcier to a backup role. Rumors of Forcier’s impending transfer sprouted up several times throughout the spring and summer, especially when Forcier had to “earn his wings” at the beginning of summer practices; several Michigan players, including Forcier, who had less than stellar offseasons were given plain blue helmets. While Denard Robinson was reportedly studying film, working hard on his mechanics, and participating in voluntary 7-on-7s, Forcier reportedly made rare appearances at voluntary sessions during the summer.

Forcier is still one of the top three most important players on the team due to his position and talent. Denard Robinson has received more snaps with the first string offense since the spring, and Forcier has been playing catch-up. And while Robinson is clearly a superior runner to Forcier, Michigan fans should remember that Shoelace is tearing up a Michigan defense that might be one of the worst in the Big Ten this year. Robinson made it clear in 2009 that he can gain yards on the ground against just about anyone, but he also made it clear that he has a long way to go as a passer. Forcier is virtually the opposite – he’s just an okay runner, but has the ability to be a very good passer. Denard Robinson’s legs might let him run past early foes with mediocre defenses like Connecticut, Notre Dame, UMass, Bowling Green, and Indiana. But the tougher defenses that loom in the second half of the season (Iowa, Penn State, Wisconsin, and Ohio State) will require a more nuanced passing attack, one that Robinson is unlikely to produce at this point in his development. Robinson was integral enough to be #5 on this countdown, but Forcier will end up being more valuable by the end of the 2010 campaign.