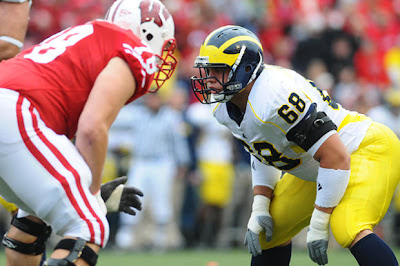 Martin has been somewhat underappreciated at Michigan over the past two seasons. It’s rare that a true freshman defensive tackle steals snaps from a talented fifth year senior, but that’s what happened when Will Johnson saw his minutes declining in 2008. Last year Martin developed into a force in the middle of Michigan’s defense, racking up 51 tackles and 8.5 tackles for loss as a sophomore. Those are pretty good numbers for a guy who plays between the center and guard and gets double-teamed on a regular basis, especially when one considers that he played with a bum shoulder for much of the season. (The aforementioned Terrance Taylor’s best season included 55 tackles and 8.5 tackles for loss as a junior in 2007.)

The upcoming season will be a big test for Martin. No longer will he be aided by having Brandon Graham to one side of him, soaking up some double-teams. This is Mike Martin’s defensive line, and though it’s the strength of the team, it’s not outstanding. He’ll be flanked by a tackle/end tweener (Ryan Van Bergen) and a fifth year senior starting for the first time (Greg Banks). The defensive backfield is in shambles, and the linebacker crew is in limbo. Martin’s backup, sophomore William Campbell, hasn’t played consistently enough to wedge himself into the starting lineup, so Michigan has a 333 lb. benchwarmer. Martin needs to remain healthy in 2010 and step his game up another notch. He needs to play like an All American this season for Michigan’s defense to resemble adequacy. Hopefully he can replicate William Carr’s junior season, during which Carr earned 82 tackles, 21 tackles for loss, and 6 sacks. That’s asking a little much, though.