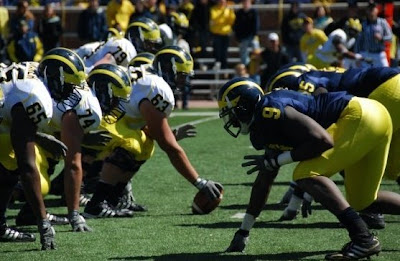 Khoury was a lightly regarded recruit coming out of high school. As a redshirt freshman in 2009, he reportedly struggled with snapping the ball in practice. Spring reports from pre-2009 hinted that Michigan would be in serious trouble if Molk were injured, and Murphy’s Law seized its opportunity. Molk went down with a broken bone and then a torn ACL, but Khoury was nowhere to be found. Offensive line coach Greg Frey deemed starting right guard David Moosman as a more capable replacement, which is scary considering the number of errant snaps sent hurtling towards the quarterbacks for the remainder of the season. This is not to speak badly of Moosman, who was a very solid guard prior to the change. Perhaps it’s more indicative of how difficult the center’s job is in Rodriguez’s offense.

Shotgun snaps aren’t anything to take lightly. If you’ve ever played quarterback in backyard football, you know how annoying a bad snap can be. Now take that center; put a bunch of pads on him; implant a drooling, stinky, 320 lb. ogre across from him; have him identify the blocking schemes; tell him to snap the ball in rhythm; and, oh yeah, make a quick sideways step while simultaneously snapping the ball in order to block that ogre. Now you almost feel sorry for the center, don’t you?

Anyway, Khoury has reportedly improved his snaps significantly over the past year. He’s an extremely important backup, but not simply because of the center’s involvement in the play. Remember that Molk tore his ACL on October 24, 2009, against Penn State. When September rolls around, Molk will be less than a year removed from surgery. He’s in the same boat that running back Vincent Smith inhabits, although Smith plays a position where knee mobility is of great import. Many Michigan fans think Smith should redshirt in 2010, but assume that Molk will be ready to start on Day 1. Molk will be able to wear a brace, but he might not be 100%. I would surmise that Khoury will get a heavy dose of playing time this season, especially if Michigan opens up a wide lead in the first five games of the season.