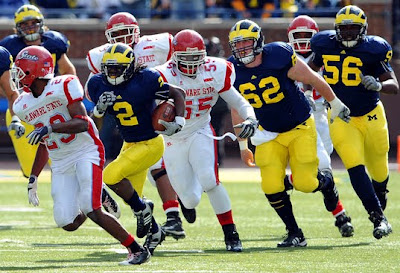 Smith had a solid freshman season and contributed more than most people expected he would. The coaches made up their minds early that he would play, as he saw game action in the 2009 season opener. He had a great game against Delaware State, racking up 166 yards on 17 carries. Otherwise, he had a ho-hum season rushing the ball. Against FBS schools, Smith carried the ball 31 times for 110 yards, a 3.55 yards per carry average. He did, however, contributed a good deal in the passing game and scored Michigan’s only touchdown against Ohio State on an 18-yard reception. Later in the game, though, Smith tore his ACL.

Receiving the bulk of the carries given to non-seniors last season, many fans expected that Smith would be the front-runner for the starting superback job in 2010. That is not my expectation, and there are several reasons:

1. I don’t know that I’ve ever seen a 5’6″ starting running back at an FBS school, especially in the Big Ten.
2. Smith tore his ACL on November 21, 2009, meaning that he’ll be less than 10 months removed from surgery when the season starts. Those injuries usually take 12 to 18 months from which to fully recover, especially for jitterbug running backs who will be bending that knee in all different directions.
3. For all of Smith’s pass-catching ability, his running ability is lacking. His elusivity is his main strength, but his speed and strength leave something to be desired. It’s not unusual for freshman running backs to adjust quickly to the college game, but 3.55 yards per carry indicates that the adjustment hasn’t taken place yet.
4. There are better running backs on the roster, in my opinion.

I do expect Smith to play in 2010. He has reportedly been running near full speed this summer (although not cutting quite yet), and being 20 years old certainly speeds the healing process. The coaches obviously like some of the skills he brings to the table. However, being the starting running back on a Big Ten team less than 10 months removed from a torn ACL isn’t likely. Although I don’t expect it, I’d like to see Smith take a medical redshirt in 2010 and recover completely in time for the 2011 season.