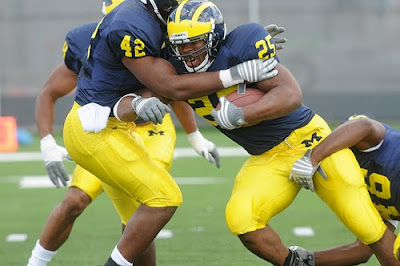 Demens has received a lot of hype in the run-up to the 2010 season, largely due to the fact that Michigan’s inside linebackers – particularly Obi Ezeh and Jonas Mouton – have underachieved over the past two seasons and fans are looking for change. At 244 lbs. Demens is Michigan’s heaviest true linebacker, despite also being the team’s shortest at 6’1″. That size has led practice observers to call him a “thumper” and a real threat to opposing running backs.

I remain skeptical of Demens’s level of contribution in 2010. He’ll surely play, if only to prepare him for a larger role in 2011. But I think – and hope – that presumed starter Obi Ezeh will step up his play this fall as long as he’s fully recovered from last year’s back injury. Demens won’t earn a starting job in 2010, but chances remain high that Demens is the heir apparent in the middle. He will, however, make an impact on special teams and be ready to step in adequately should any injuries occur.