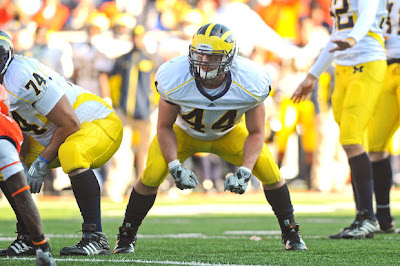 Moundros is an interesting – okay, confusing – case. He had over 2,000 yards rushing as a senior in high school, then walked on to the Michigan football team. He beat out a couple scholarship fullbacks for the starting job, forcing them to switch positions and subsequently leave the school. He was named Michigan’s Special Teams Player of the Year in 2008, caught a touchdown pass, ran the ball effectively in limited opportunities. He seemed to be the up-and-coming Owen Schmitt of the Wolverines.

Then in 2009 . . . nothing. He got a concussion early in the season on kickoff coverage, but still played in all 12 games. He barely played at fullback, despite looking fast and athletic in the 2009 spring game. After all the hype surrounding Schmitt at WVU, Michigan’s lone fullback specialist was a ghost. Maybe the coaches thought Kevin Grady was a better fullback and deserved to play in his fifth year, despite being a tailback/fullback hybrid-type. Grady did contribute 80 yards on the ground, but 73 of those came against Delaware State.

This past spring Moundros asked to get some reps at inside linebacker, just for a chance to see the field and help the team. He was given the opportunity and will supposedly continue to get reps at MLB, but I don’t expect to see him on the field there this fall. His 2009 disappearing act notwithstanding, I do expect Moundros to be the starting fullback in 2010. He’s a good blocker, has soft hands, and is more athletic than any Michigan fullback since BJ Askew. I don’t expect him to approach Schmitt’s statistics (47 carries, 272 yards, 5.8 ypc, 4 TDs as a senior at WVU), not only because Schmitt was a superior athlete, but because freshman Stephen Hopkins might steal some of those short yardage carries. But he could be a very solid contributor in 2010, and if nothing else, he should make some crushing blocks.