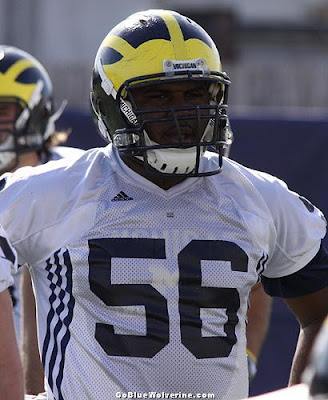 Barnum is one of those guys whose potential remains to be seen. He was highly recruited coming out of high school, but a series of injuries have caused him to miss spring practices and occasional fall practices. His play at offensive center has been somewhat lackluster, which makes him the fourth-string player at the position (behind Molk, Khoury, and Mealer). He’s also behind a couple classmates at guard (Omameh and Mealer).

But Barnum offers something that nobody else on the team does – the ability to play every position on the offensive line. That makes him an important backup. As Patrick Omameh’s understudy at right guard, Barnum should get more playing time than last season; he’s probably third string, behind Taylor Lewan and Michael Schofield, at tackle. I don’t expect Barnum to vie for a starting job until perhaps 2012, when current starters Perry Dorrestein, Steve Schilling, David Molk, and Mark Huyge will have departed.