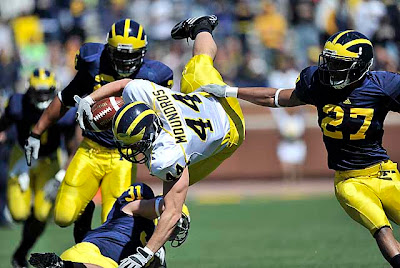 Jones was an early enrollee in 2009 who I expected to contribute in a more meaningful way due to the shortage of scholarship players. Instead, he was exclusively a special teamer. For some odd reason, the coaching staff burned his redshirt so he could play about half a season on coverage units and make 3 tackles. That seems like a waste of a year of eligibility, but obviously I’m just a guy on the internet.

Anyway, Jones made a transtion mid-season from SAM to the weakside linebacker position, at least nominally backing up Jonas Mouton. He’ll enter fall camp anywhere between the third- and fifth-string weakside backer. Mouton will start, but J.B. Fitzgerald, Kevin Leach, and perhaps Kenny Demens will figure into the depth chart. Jones is also pretty light at only 207 lbs., so he’ll probably need to spend another year or two adding weight.