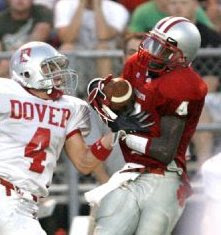 One of several early enrollees on offense, Robinson is perhaps the most likely to earn playing time this fall. He earned solid reviews throughout the spring for his ability to run routes and make plays downfield, and he’s the most athletic of the freshman wideouts. With only a few returning wide receivers, at least one freshman will play.

Despite not enrolling early last year, freshman Je’Ron Stokes played sparingly, beginning with the first game of the year. Including Stokes, the Wolverines played five scholarship wide receivers last year – Greg Mathews and Laterryal Savoy, both of whom graduated; and Junior Hemingway, Darryl Stonum, and Stokes. If that number were to stay the same in 2010, two freshman would have to play. However, that need for freshman contributions may be mitigated by the fact that Roy Roundtree and Martavious Odoms may have the option and versatility to play outside, rather than just the slot. All things considered, expect to see Robinson on the field in the fall.