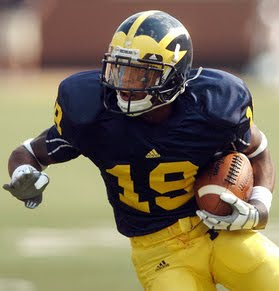 The brother of former Michigan running back Kevin Grady, the younger Grady came to Michigan to play basketball. But he didn’t quite fit in Coach Beilein’s system and left the basketball team. Grady then decided to walk on to the football program in 2009 after having been a star high school running back. Grady was impressive enough that he earned starter-level playing time early in the season. He caught 10 passes for 102 yards and 1 touchdown, but was surpassed late in the season by Roy Roundtree; Grady started dropping passes and then didn’t even play in the final three games of the year.

The word from insiders is that Grady will be given a shot to earn playing time at either slot receiver or running back in the fall. Without a returning starter at the running back position – and underwhelming performances during the spring game – Grady might offer some depth. I’m not expecting much from him this fall. He’s too slight to play running back in the Big Ten, and there are better options there; and the combination of Roundtree and Martavious Odoms at slot receiver is potentially deadly, not to mention up-and-comers Terrence Robinson and Jeremy Gallon. It’s a good thing for Michigan that someone with Grady’s talent might be its fifth best player at the position; it’s a bad thing for Grady himself.

Prediction for 2010: Scarce duty as backup slot receiver. He won’t match the stat totals from 2009.