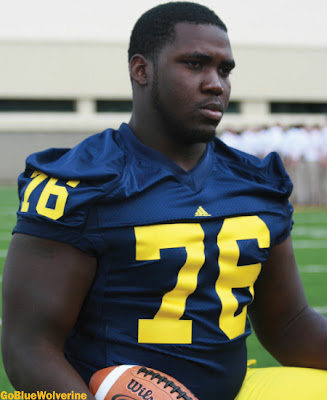 Washington is a mammoth offensive guard, weighing more than all but two of his teammates – nose tackle Will Campbell (324 lbs.) and fellow guard Elliott Mealer (310). As evidence that Rich Rodriguez is embracing larger offensive linemen, there are now five 300-pounders; there were only two in 2009. With several guards ahead of him on the depth chart last season, Washington’s services weren’t needed . . .

. . . and they probably won’t be needed again this year. David Moosman was the only guard to graduate in 2009. Steve Schilling returns at left guard, and last year’s part-time starters at right guard (Patrick Omameh and Mark Huyge) also return. Mealer, Ricky Barnum, and part-time 2008 starter John Ferrara also return. There have also been reports from practice that Washington has been developing slowly. That’s not a concern at this point, considering that he’s only one year removed from high school. But Michigan fans shouldn’t be expecting to see Washington on the field much this season. Perhaps he can push for the guard position that Schilling will be vacating after this season.