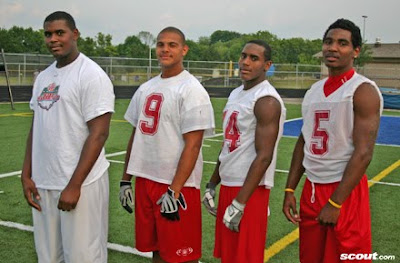 Terry Talbott, the older and larger brother of Terrence, is a quick-footed defensive tackle prospect from the Worst State Ever. He’s got the physical skills to be a dominant high school defensive lineman, but sometimes it’s hard to project guys forward when they need to gain 30 or 40 pounds before they can sniff the playing field. As it stands, Terry has the quickest first step of any defensive tackle Michigan has brought in over the last several years. But as you can see in the picture above, he’s got some filling out to do.

From my perspective, Terry needs at least a year to bulk up. He seems to be headed for the 3-tech DT spot, which means he can probably play at a weight between 280-290 lbs. But it needs to be good weight, not just additional blubber. Michigan has a fair amount of depth at those interior positions with Mike Martin and Greg Banks the likely starters. Renaldo Sagesse, William Campbell, and Adam Patterson will back them up. So as long as nobody gets seriously injured, the freshmen can probably afford to sit and watch for 2011.