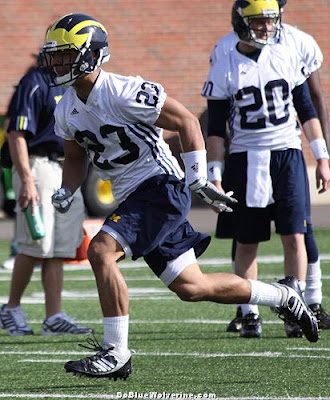 Austin White is a very interesting prospect to me. Recruited to play running back, he has the skill set to play several positions – running back, slot receiver, wide receiver, or even safety. He also has the pedigree to play receiver, having two brothers who played receiver at Michigan State; older brother Blair was signed by the Indianapolis Colts as an undrafted free agent in May. (EDIT: It has been brought to my attention that Blair is no relation. Mitchell and Myles White are Austin’s brothers. To state the obvious, I guess I don’t give a damn about MSU athletics or I would have remembered that.)

White enrolled in January, and he’s got decent size at 196 lbs. Reports out of spring practice indicate that he was behind fellow early enrollee Stephen Hopkins, and for that reason, I think White will redshirt. The running back position is somewhat clogged, albeit with unproven players. I would not be surprised to see White change positions at some point in his career, but those things usually happen after a year or two of unsuccessful attempts at the original spot.