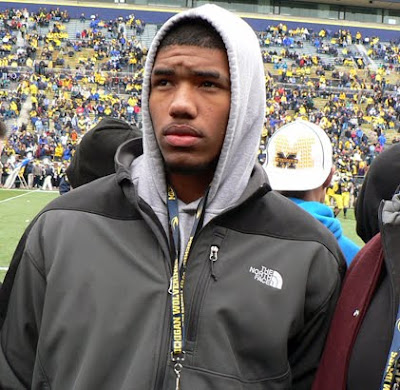 Okay, the reason Antonio looks so sad in the above picture must be that he’s not coming to Michigan in the fall. The stupid thing about college is that you have to graduate high school first. Lame. Antonio, being from the Worst State Ever, has an Ohio Graduation Test to pass. This is the same test that prevented cornerback/safety Justin Turner from joining fall camp on time last year.

Kinard was likely looking at a redshirt this fall, anyway. He’s too skinny and too raw to have played as a freshman, so it doesn’t really hurt Michigan on the field in 2010. It does potentially hurt the Wolverines in 2011-14, though, because there’s little to no depth at inside linebacker. Once senior Jonas Mouton graduates, that essentially leaves Mike Jones as the only weakside ‘backer on the squad.

I am not optimistic that Kinard ends up at Michigan anytime in the future. If you look at the last few guys who have been non-qualifiers, all or most have taken their talents elsewhere. Demar Dorsey (Louisville), Adrian Witty (Cincinnati), Marcus Witherspoon (Rutgers before being booted), and Quintin Woods (nowhere, as far as I know) never stuck (EDIT: Quintin Woods currently plays for the Kansas Jayhawks). Marques Slocum attended prep school for a year, then came to Michigan only to get kicked off the team. He finished his playing career at Eastern Arizona and is currently fighting for a spot on the Washington Redskins after going undrafted in 2010.