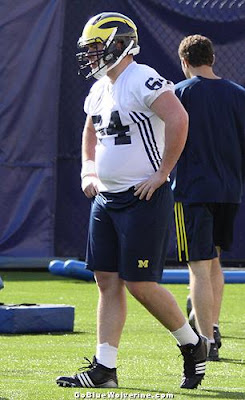 Pace enrolled early, so he’s been at Michigan for a few months. But on Michigan’s spring roster, Pace is listed at 259 lbs. He will surely add some weight between now and the season, but not enough to be a factor in the depth chart at center. David Molk should be back in playing shape after tearing his ACL last season, even if he won’t be 100%. The backup from last season, David Moosman, has graduated and moved on. However, Michigan still has a couple options if Molk isn’t ready. Redshirt sophomores Rocko Khoury, Elliott Mealer, and Ricky Barnum all have the ability to play center if Molk re-injures himself. I believe Pace will be a good center down the road, but it’s rare for true freshmen to play on the offensive line.