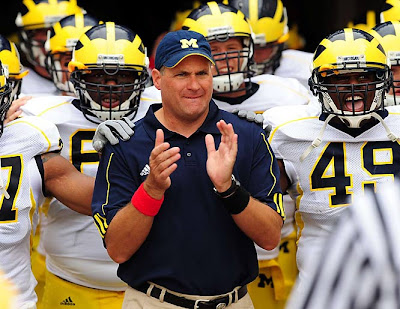 Starting quarterback: Denard Robinson will start the season opener against UConn on Saturday. However, I think his lack of passing ability (although improved) will give Tate Forcier a chance to take the majority of the snaps by the end of the season.

Leading rusher: Denard Robinson. Even if he’s not the starting quarterback for the entire season, he should get enough carries – and enough big plays – to be Michigan’s leading rusher. The team also lacks a clear #1 running back, which means handoffs will be shared amongst Michael Shaw, Vincent Smith, Michael Cox, Fitzgerald Toussaint, and Stephen Hopkins. My guess is Robinson will end up with around 800 yards rushing.

Leading receiver: Roy Roundtree. The quarterbacks like to target the slot receivers, and Roundtree caught 30 balls over the last four games last season. The guess here is that Roundtree gets 60 catches and 900 yards this season.

Leading interceptor: I don’t expect Michigan to grab a lot of picks this year. The Wolverines will probably have a few guys pick off two passes each, and those will be J.T. Floyd, Jordan Kovacs, and Jonas Mouton. But because I don’t want to be wishy-washy like Michael Wilbon, I’ll pick Floyd.

Breakout offensive player: I don’t see anyone having a monstrous season, and Roy Roundtree was probably 2009’s breakout player, or else I would pick him. So I’ll go with Denard Robinson, who will hopefully be able to pass the ball well enough to qualify in this category.

Breakout defensive player: Ugh, this defense looks bad. I guess I’ll go with Ryan Van Bergen. He won’t be a superstar and he won’t approximate Brandon Graham, but he should be able to get a consistent pass rush.

Most disappointing offensive player: Despite being listed as a co-starter, I think Vincent Smith will be somewhat of a disappointment this year. A lot of people thought he was the heir apparent last year when he seemed to be the primary backup for the senior running backs, but I think he’s just mediocre. He might be consistent, but spectacular plays are outside his reach, in my opinion.

Most disappointing defensive player: Cameron Gordon can’t possibly live up to all the offseason hype, although I hope he can. He’s still going to be raw, and I think he’ll make some frustrating plays. This is a hard category to pick, because not much is expected from anyone on defense, really.

The Big Finish
Sept. 4 vs. Connecticut: WIN. Connecticut is a little banged up, and they will be able to run the ball. But Rodriguez was undefeated against UConn in the Big East, and most of those games were blowouts. He knows how to defeat a Randy Edsall-coached team.

Sept. 11 at Notre Dame: LOSS. Dayne Crist and Michael Floyd will dispatch an overmatched secondary in a shootout.

Sept. 18 vs. UMass: WIN. Something approximating the 63-6 trouncing of Delaware State last year is likely.

Sept. 25 vs. Bowling Green: WIN. Michigan’s high-powered offense and superior athletes should be able to roll past BGSU, and the Falcons lost some significant firepower from last season.

Oct. 2 @ Indiana: LOSS. Remember when I said that Troy Woolfolk’s injury would cost Michigan a game at some point? It’s this one right here.

Oct. 9 vs. Michigan State: LOSS. I’d like to pick a win here, but Michigan isn’t good enough to start 5-1, and Kirk Cousins should be able to throw the ball all over the field.

Oct. 16 vs. Iowa: WIN. Michigan barely lost at Iowa last season, and the Wolverines match up with the Hawkeyes better this year. Iowa has a stout defense, but Michigan’s offense has improved.

Oct. 30 @ Penn State: WIN. Penn State’s quarterback position is in flux, the offensive line is weakened, and the defense suffered from some big losses. They’ll get a bunch of rushing yards, but Michigan should be able to pull it out in the end.

Nov. 6 vs. Illinois: WIN. Illinois sucks. They’ll be able to run the ball, but they won’t score enough.

Nov. 13 @ Purdue: WIN. Purdue has a solid defense and they’ve beaten Michigan a couple years in a row . . . I just can’t imagine the Boilermakers running the streak to three.

Nov. 20 vs. Wisconsin: LOSS. Wisconsin looks good this year. Even though I think they’ll fall short of many people’s expectations, they’re probably better than the Wolverines.