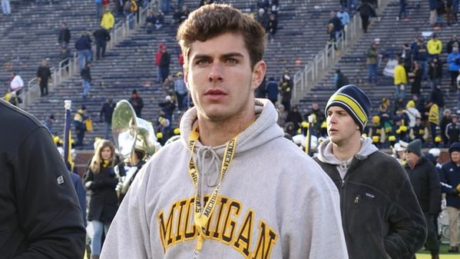 A locally grown talent, Nordin irked some by committing to Penn State. Not because he picked the Nittany Lions, necessarily, but because he did so by posting a video of him “coming home” to Penn State, a somewhat audacious move for a high school football player. A kicker.

But then a curious thing happened. He started visiting Michigan. And kept visiting Michigan. And retweeted a lot of Michigan stuff. And made friends with other Michigan commits. The story goes that he committed to PSU because Michigan wasn’t sure if they could fit a kicker into their class (they took kicker Andrew David in 2015, too), but as the Wolverines amped up the pressure to squeeze him in, he became more amenable to being a Wolverine. There were more big waves with Nordin when Jim Harbaugh made an in-home visit that saw him spending the night at Nordin’s house. That was two times that a high school kicker ended up being talked about by national pundits on ESPN and the like.

Entering the fall season, Nordin has a chance to contribute as a punter or a kicker. Fifth year senior Kenny Allen did a good job with the placekicking last year, so he should hold down that spot. But Michigan has no real heir apparent for the punting job unless Allen pulls double duty. I assume Allen will start off the year doing both jobs, but Nordin may be called upon if there’s an injury or if he’s a more consistent punter than Allen. Nordin is a tough guy to place in the countdown, because he could redshirt, but he could also be the starting punter and kicker if Allen tweaks a knee or ankle.