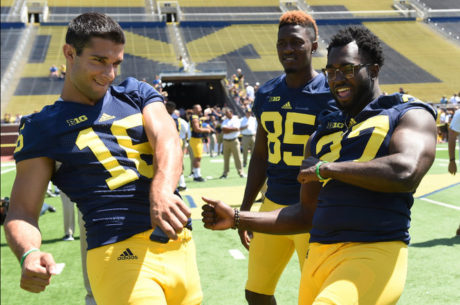 Wangler – the son of former Michigan QB John Wangler and the brother of LB Jared Wangler – enters his fourth season on campus after committing to Brady Hoke as a preferred walk-on, and this is the first time I’m profiling him in the countdown. He has played in three games in his career, including just one as a redshirt sophomore in 2015. He did see quite a bit of action in the spring with Michigan’s receiver corps decimated by injury (Maurice Ways, Jehu Chesson), along with a host of freshmen at the position who have yet to enroll. Wangler isn’t a quick-twitch guy and struggles to get separation, but he does seem to be the most trusted walk-on wideout. I doubt he will play much once Ways, Chesson, and the freshmen are in action.