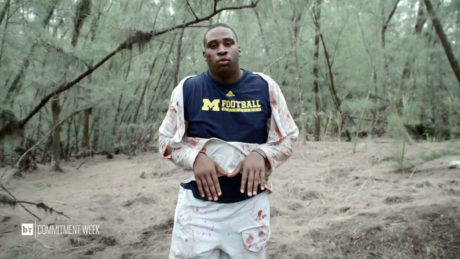 
Bradenton (FL) IMG Academy safety Grant Delpit committed to LSU. Delpit is a hard-hitting, 6’4″, 196 lb. safety who also has excellent ball skills. He transferred from Texas to IMG Academy this off-season, as well.

Bradenton (FL) IMG Academy offensive tackle Robert Hainsey committed to Notre Dame. Michigan was his in his final three, but MSU and Notre Dame were his leaders at different points, with Michigan always playing second or third fiddle. He originally attended Monroeville (PA) Gateway before transferring to IMG after his sophomore year.

Cheshire (CT) Cheshire Academy athlete C.J. Holmes committed to Notre Dame. A teammate of 2017 wide receiver Tarik Black, Holmes could play running back, wide receiver, cornerback, or safety at the next level. He’ll be a dangerous player for Michigan fans to watch when the Michigan vs. Notre Dame rivalry reignites in 2018.

Detroit (MI) Cass Tech offensive guard Jordan Reid committed to Michigan State. While it’s an in-state loss to an in-state program, you can see that I ranked Reid as the #18 player in the State of Michigan back in mid-June (LINK). No sour grapes here: I’m not too devastated that he chose the Spartans.

Groton (MA) Lawrence Academy running back A.J. Dillon had a vertical jump of 38.2″, which isn’t bad for a guy who’s listed at 6’1″, 230 lbs. He finished #9 in SPARQ score. He didn’t create a ton of buzz at The Opening, but it’s not exactly a setting designed to showcase power backs.

Los Lunas (NM) Los Lunas running back O’Maury Samuels had a vertical jump of 44.3″. He was the national leader in SPARQ score going into the event, but he finished 21st at The Opening.

Here’s a chart of the top 30 scorers at The Opening: 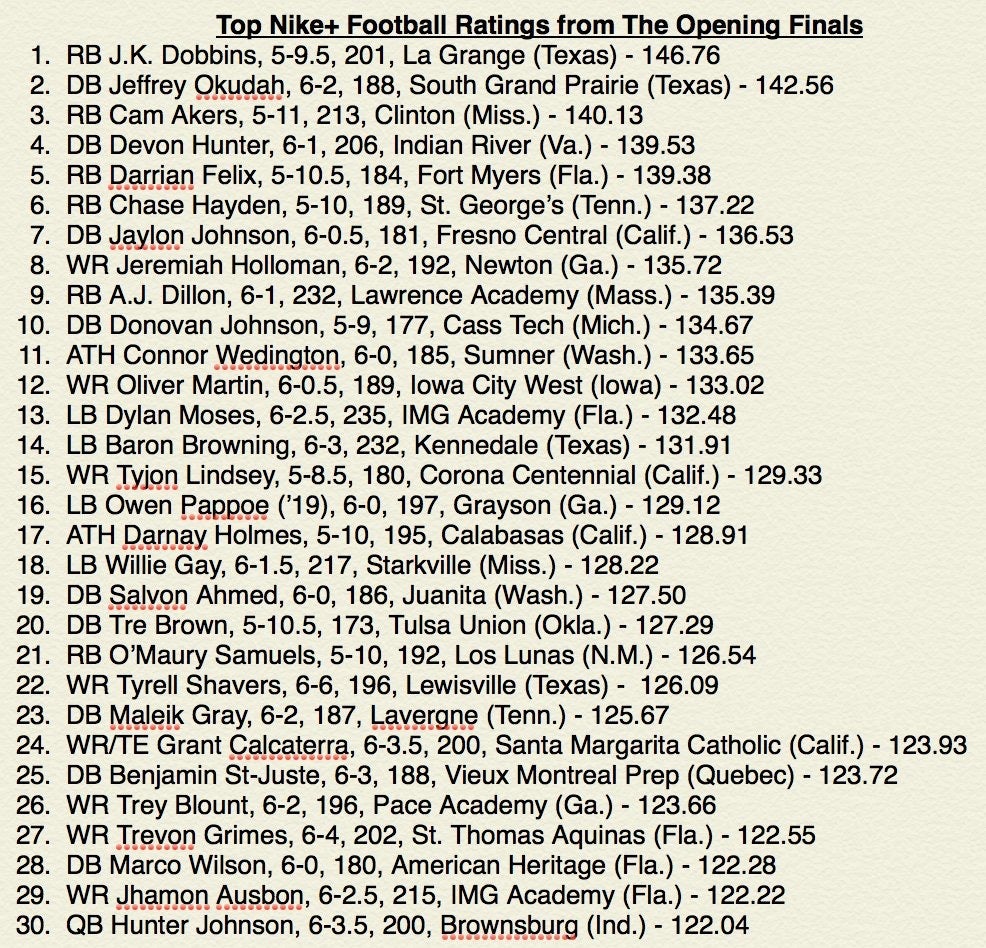 Samuels’s previous score would have put him at #2. You’ll also notice that former Michigan commit Jeremiah Holloman finished at #8, and Michigan native Donovan Johnson – who doesn’t have an offer from the Wolverines – was #10. Detroit (MI) Cass Tech wide receiver Donovan Peoples-Jones, the #1 receiver in the country, did not participate due to an injured hamstring. He won last year’s SPARQ national championship, and his score would have been good enough for #1 this year, too.