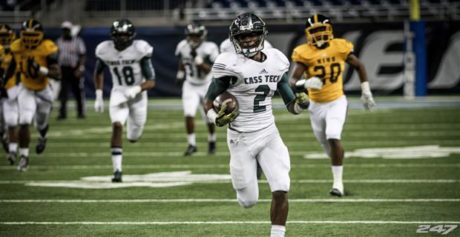 If you like the content here at TTB, please consider donating by using the Paypal button the right sidebar or by making purchases on Amazon (LINK). You can also follow me on Twitter (LINK).

This is the fourth installment of my take on the top prospects in the state of Michigan for the 2017 class. You can take a look back at #1-5 (LINK), #6-10 (LINK), and #11-15 (LINK) if you haven’t seen them already. Hit the jump for #16-20, including a couple guys from Muskegon and West Bloomfield you probably haven’t heard of unless you’re a hardcore recruiting follower. Enjoy!

16. Donovan Johnson – CB – Detroit (MI) Cass Tech
Height: 5’10”
Weight: 176 lbs.
Notable offers: Arizona, Missouri, Nebraska, Oregon, Penn State, Tennessee, Virginia Tech, West Virginia, Wisconsin
Commitment: Uncommitted
247 Composite: 3-star, #42 CB, #440 overall, #12 in-state
Analysis: Johnson has offers from a bunch of good programs, though not the top-tier programs. He has very good speed and recently timed in at 4.43 seconds in the forty at a Nike Opening Regional camp. I’m not in love with his defensive instincts, but he has good enough athleticism to hold his own against elite receivers, including Donnie Corley. He has good change-of-direction skills and offensive instincts, and I think he might be just as valuable or more at slot receiver or returner.

17. Allen Stritzinger – CB – Warren (MI) De La Salle
Height: 6’0″
Weight: 184 lbs.
Notable offers: Michigan, Syracuse
Commitment: Uncommitted
247 Composite: 3-star, #40 S, #538 overall, #16 in-state
Analysis: Stritzinger has earned the most notoriety for playing running back, but now it looks like he’s leaning toward playing defensive back in college. As a runner, he’s a little too prone to bouncing things outside and really tries to avoid contact, but he shows some good acceleration and speed. He’s also not the most aggressive defender, but he has some good ball skills and can cover ground pretty well.

18. Jordan Reid – OG – Detroit (MI) Cass Tech
Height: 6’3″
Weight: 286 lbs.
Notable offers:  Arizona, Florida, Michigan, Michigan State, Pitt, Tennessee
Commitment: Uncommitted
247 Composite: 3-star, #16 OG, #441 overall, #13 in-state
Analysis: At one time Reid was thought to be headed for the defensive end position, but he has grown into an offensive lineman. He’s still not the most massive lineman, but he should be able to add adequate weight in college. He moves well for his size, but I have reservations about the way he finishes (or doesn’t finish) blocks. I would like him to display a little more aggression.

19. Kalil Pimpleton – WR – Muskegon (MI) Muskegon
Height: 5’7″
Weight: 160 lbs.
Notable offer: Virginia Tech
Commitment: Virginia Tech
247 Composite: 3-star, #168 WR, #1234 overall, #32 in-state
Analysis: Orchard Lake (MI) St. Mary’s wide receiver K.J. Hamler has earned a lot of hype as the standout tiny slot receiver in the state, but Pimpleton might be able to give him a run for his money. He plays quarterback for Muskegon because he’s such a gamebreaking athlete (4.56 forty), and he rushed 167 times for 1,068 yards and 17 TDs while going 88/156 for 1,180 yards and 10 TDs through the air. His highlight film is worth watching because of some amazing plays (although you’ll have to wade through 40 seconds of stats, accolades, etc. to get there). He shows some excellent ball skills when he gets an opportunity to make a catch, and he changes direction very well, as you might expect from someone his size. His size is limiting, but slot receiver and returner seem like spots he can play in college.