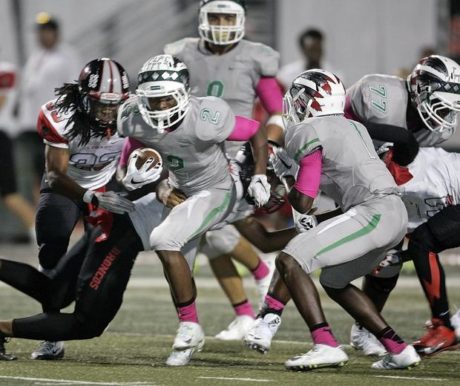 Waxahachie (TX) Waxahachie wide receiver Kenedy Snell was offered by Michigan. He’s a 5’8″, 167 lb. prospect with offers from Kansas and Louisiana-Lafayette. He doesn’t have a 247 Composite rating yet. As a junior in 2015, he ran 84 times for 778 yards and 11 TDs; he also caught 22 passes for 557 yards and 5 TDs. I know Michigan fans are tired of under-the-radar recruits, but Snell is lightning in a bottle. I think every team should have at least one undersized, speedy, all-purpose guy who can work in the slot, return punts, etc. I wouldn’t be too upset if he committed to Michigan. He plays for former Detroit Lions (and other teams) quarterback Jon Kitna, whose son Jordan was the QB at Waxahachie last season (LINK) and spurned a couple offers to be a walk-on at Michigan State this coming fall.

Stone Mountain (GA) Stephenson defensive end Aaron Sterling, an Alabama commit, was offered by Michigan. He’s a 6’1, 270 lb. prospect with offers from Georgia, LSU, North Carolina, South Carolina, and Tennessee, among others. He’s a 247 Composite 3-star, the #16 strongside end, and #410 overall. His athleticism doesn’t jump off the screen when you watch him, but he’s a playmaker. He scored a couple touchdowns on interception returns, and he shows a variety of pass rush moves. Alabama’s defensive line coach, Bo Davis, recently resigned after some alleged recruiting violations, so that might be something to watch. However, Davis was not Sterling’s primary recruiter, so that bond may not have been extremely strong. Even so, it’s always difficult to pull southerners out of the south, especially when they’ve already shown they intend to stay in the south. I wouldn’t expect much to come of this offer, but the Stone Mountain area produces a lot of talent.

I have officially committed to…??pic.twitter.com/5Hkjs4cFb8

MISCELLANEY
Here’s a list of visitors from last week (LINK).

Here are some news bits from in-state players who participated at the Nike Opening Regional in Columbus, OH, over the weekend:

Over on Recruiting Season, I didn’t make many updates this week. However, Muskegon (MI) Muskegon WR/CB Kalil Pimpleton committed to Virginia Tech.