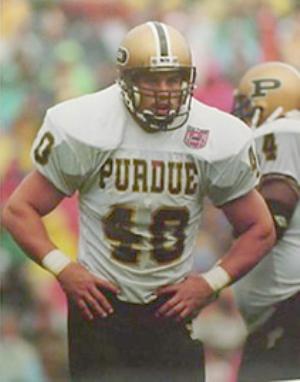 I have always been infatuated with pro athletes and their kids’ athletic careers. Maybe it started when I watched Ken Griffey, Jr. play baseball with his dad, but it amazes me sometimes when people who are some of the best athletes in the country – or even the world – have kids who grow up to follow in their footsteps. So for the last several years, I have compiled lists of players who have accomplished athletes as fathers. I’m sure there are others out there that I have not come across, but below is a list of thirteen prospects for the class of 2016 who had standout athletes for dads. You can see past versions by clicking on the year (2015, 2014, 2013, 2012)

Griffin Alstott – QB – St. Petersburg (FL) Northside Christian: Alstott is a 6’2″, 200 lb. quarterback with a lone offer from Appalachian State. He’s a 247 Sports 3-star, the #18 dual-threat QB, and #580 overall. He is the son of former Purdue and Tampa Bay Buccaneers running back/fullback Mike Alstott, who was Purdue’s career touchdown leader after he finished his college career in 1995 and averaged 5.6 yards/carry as a 6’1″, 240 lb. bruiser. He became a 2nd round pick of the Buccaneers, playing his whole career there from 1996-2006. He had over 5,000 yards rushing, over 2,000 yards receiving, and a total of 71 touchdowns while winning a Super Bowl and going to six Pro Bowls.

Devin Bush, Jr. – LB – Pembroke Pines (FL) Flanagan: You know all about Devin Bush, Jr. because he enrolled early at Michigan earlier this month. Here’s his commitment post if you need a refresher (LINK). Bush is the son of Devin Bush, who was a 1st round pick (#26 overall) by the Atlanta Falcons out of Florida State in the 1995 draft. He played eight years in the NFL with the Falcons, St. Louis Rams, and Cleveland Browns, finishing his career with 410 tackles and 7 interceptions. He is now the head coach at Flanagan, although there have been rumors that he could join Michigan’s staff in some sort of recruiting coordinator capacity.

Stephen Davis, Jr. – ATH – Irmo (SC) Dutch Fork: Davis is a 6’4″, 215 lb. prospect who’s a 247 Composite 3-star, the #20 athlete, and #397 overall. He has offers from Clemson, Florida, and Georgia, among others, and his top two are Auburn and South Carolina. Davis started high school as a running back prospect, but he has probably outgrown that position now. He will probably be an outside linebacker or a tight end at the next level. He is, of course, the son of former Auburn running back Stephen Davis, who went on to an NFL career with the Washington Redskins, Carolina Panthers, and St. Louis Rams. The elder Davis was All-SEC two times and became a 4th round pick of the Redskins in the 1996 NFL Draft. He made three Pro Bowls in his career (all with the Redskins) and averaged 4.1 yards/carry for his career, finishing with 8,052 yards and 65 touchdowns.

Michael Irvin, Jr. – TE – Fort Lauderdale (FL) St. Thomas Aquinas: Irvin is a 6’3″, 220 lb. prospect who’s a 247 Composite 3-star, the #32 tight end, and #629 overall. Michigan offered him a scholarship, even though it seemed like a foregone conclusion that he would end up as a Miami Hurricane. He also picked up offers from Georgia and N.C. State, among others. Irvin is the son of famous football player and TV personality Michael Irvin, a former Hurricane and Dallas Cowboy. The elder Irvin was a standout college receiver in the mid-1980s whose stats were not impressive when compared to today’s pass-happy offenses, but he grabbed 143 passes for over 2,400 yards and 26 TDs. That earned him the #11 overall draft slot for the Cowboys in 1988 after leaving college a year early. A year later, Dallas picked quarterback Troy Aikman with the #1 overall pick and then got Emmett Smith in 1990, forming the famous triumvirate that won three Super Bowls in the early 1990s. Irvin caught 750 passes for 11,904 yards and 65 touchdowns in his twelve-year career, retiring after the 1999 season. He was inducted into the NFL Hall of Fame in 2007 and is now a football analyst on ESPN.

Bryce Mathews – OT – Brentwood (TN) Brentwood Academy: Mathews is a 6’5″, 280 lb. prospect who is committed to Ole Miss. He’s a 247 Composite 4-star, the #23 offensive tackle, and #245 overall. Michigan offered him last spring. He’s the son of Jason Mathews, who began his career at BYU before finishing his career playing offensive tackle for Texas A&M. He was picked in the 3rd round of the 1994 NFL Draft by the Indianapolis Colts and played through 2004 with the Colts and the Tennessee Titans. He started 43 NFL games and played in 142 total during his career. He’s now the head coach at Brentwood Academy.

DeKaylin Metcalf – WR – Oxford (MS) Oxford: Metcalf is a 6’3″, 205 lb. prospect who is also committed to Ole Miss. He also had offers from Auburn, Miami, Oregon, and UCLA, among others. He’s a 247 Composite 4-star, the #18 wide receiver, and #112 overall, and he played in the U.S. Army All-American Bowl. His father, Terrance Metcalf, was an Ole Miss offensive lineman who was picked in the 3rd round (#93 overall) by the Chicago Bears. He would go on to play seven seasons in the NFL, including the Bears’ run to the Super Bowl.

Thaddeus Moss – TE – Charlotte (NC) Mallard Creek: Moss is a 6’3″, 240 lb. prospect who recently committed to North Carolina State; he also had offers from Alabama, Florida, Florida State, Georgia, Miami, Michigan, Oregon, UCLA, and USC, among others. He’s a 247 Composite 3-star, the #18 tight end, and #395 overall. The kid has some excellent athleticism, but I can’t say I’m a fan of his on-field antics. Like father, like son, I guess. I say that because his dad is Randy Moss, the Marshall wide receiver who was a contender for the 1997 Heisman Trophy. In an era when the whole country wasn’t as pass-happy as it is today, he had 174 catches for 3,529 yards (20.3 yards/catch) and 54 TDs in just two seasons for the Thundering Herd. He famously dropped to #21 overall in the 1st round of the 1998 NFL Draft because of off-the-field concerns, finally getting picked by the Minnesota Vikings. The NFL’s Offensive Rookie of the Year in 1998 and a seven-time Pro Bowler, he spent 14 seasons in the NFL with the Vikings, Oakland Raiders, New England Patriots, Tennessee Titans, and San Francisco 49ers. His final pro stats included 982 catches for 15,292 yards and 156 TDs. He set a bunch of records along the way, including receiving TDs in a season (23, with the Patriots in 2007) and receiving TDs for a rookie (17, with the Vikings in 1998). After retiring in 2012, he will probably be a first ballot Hall of Famer when he’s eligible in 2017.

Lorenzo Neal – DT – Houston (TX) St. Thomas: Neal is a 6’2″, 305 lb. prospect who committed to Purdue a couple weeks ago; a previous Utah commit, he also had offers from Boise State, Kansas, and Oregon State, among others. He’s a 247 Composite 3-star, the #106 defensive tackle, and #1843 overall. He has a 350 lb. bench and a 505 lb. squat. His father, Lorenzo Neal, was a good college tailback at Fresno State (2,405 rushing yards for his career) – and a standout wrestler – who morphed into a badass fullback in the NFL. If you were creating a football team based simply on intimidating physiques, Neal would be your first string fullback. He was picked in the 4th round (#89 overall) of the 1993 draft by the New Orleans Saints. He played sixteen seasons as a lead blocker, reaching 275 lbs. and making four Pro Bowls. His career included stints with the Saints, New York Jets, Tampa Bay Buccaneers, Tennessee Titans, Cincinnati Bengals, San Diego Chargers, and Baltimore Ravens. He finished his NFL career with 807 rushing yards, 1086 receiving yards, and 18 total touchdowns.

Terius Wheatley – RB/DB – Ann Arbor (MI) Pioneer: Wheatley is the son of former Michigan running back (and current running backs coach) Tyrone Wheatley, as well as the brother of Michigan tight end Tyrone Wheatley, Jr. I have not heard of colleges being interested in Terius, but he may be able to play at a lower level if he so chooses. Tyrone, Sr. was an All-American at Michigan, where he ran for 4,178 yards (on 6.1 yards/carry) and 47 TDs from 1991-1994. He also caught 51 passes for 510 yards and 6 TDs, along with averaging 21.7 yards/kickoff return with 1 TD. He’s #5 all-time in rushing yards at Michigan and #2 in rushing touchdowns. He was the #17 overall pick in 1995 by the New York Giants and played ten seasons for the Giants and Oakland Raiders. He retired after the 2004 season with 4,962 rushing yards, 900 receiving yards, and 47 total TDs. Since his playing career ended, he has been coaching at Dearborn Heights (MI) Robichaud, Ohio Northern, Eastern Michigan, Syracuse, the Buffalo Bills, and now at Michigan since 2015.

Antoine Winfield, Jr. – CB – The Woodlands (TX) The Woodlands: Winfield is a 5’9″, 183 lb. prospect who is committed to Minnesota; he also has offers from Houston, Missouri, Northwestern, and Purdue, among others. He’s a 247 Composite 3-star, the #124 cornerback, and #1410 overall. He claims a 4.48 forty. He is the son of former Ohio State cornerback Antoine Winfield, who was an All-American and Jim Thorpe Award winner in 1998 (only because Charles Woodson left college a year early). Winfield became a 1st round pick (#23 overall) by the Buffalo Bills in 1999 and eventually became a three-time Pro Bowler. His career lasted fourteen seasons, finishing up with the Minnesota Vikings. In total, he ended up with 1,054 tackles, 8.5 sacks, 27 interceptions (2 TDs), and 116 pass breakups.

If you know of any other relevant sons of athletic fathers, let me know in the comments.