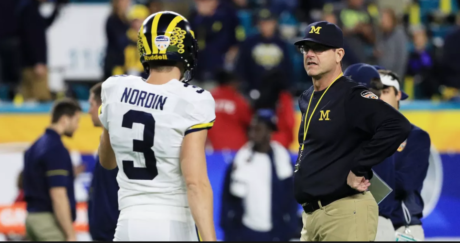 Quinn Nordin (image via Land of 10)

Ranked by some as the nation’s top kicker, Nordin entered 2016 with an uphill climb ahead of him. It was Kenny Allen Hill, and it proved too large to surmount. Allen was a fifth year senior who pulled triple duty as the kicker, punter, and kickoff specialist. He was relieved occasionally, but not by Nordin. Nordin suffered from an injury and sat out the season, allowing him to redshirt.

Now Michigan has no proven kickers, and Nordin ranks this highly on the strength of high school hype and a 97-yard field goal in the spring game. The schedule is tougher in 2017 than it was in 2016, the offense lost some key guys, and the defense lost 11 out of 12 starters (yes, I included Jeremy Clark as a starter). Field goals might be a little more important in 2017, and hopefully Nordin is capable of living up to the hype. If he can’t, that might cost Michigan a game or two.