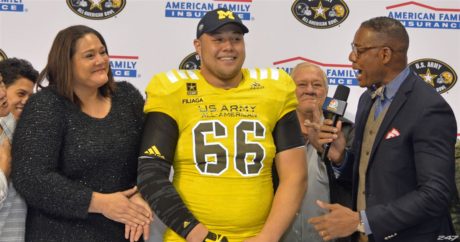 Filiaga was the prize of Michigan’s offensive line recruiting class in 2017. The U.S. Army All-American was the #14 offensive tackle and #113 overall. Michigan won out against stiff competition for his commitment, and he joins a team that needs contributions on the offensive line. After losing three fifth-year senior starters, as well as starting left tackle Grant Newsome to injury, there’s a fair amount of uncertainty.

Coming out of the spring, the projected starter at right tackle is redshirt sophomore Jon Runyan, Jr., who was expected to be a center or guard when he was a college prospect. Filiaga will have a chance to unseat Runyan and/or others on the offensive line, but according to some reports, he was the least prepared offensive lineman on the U.S. Army Bowl roster, and that’s not surprising. He’s too heavy at 6’6″ and 340 lbs., and his weight is not distributed well, since he’s somewhat top-heavy. He needs to reconfigure his body somewhat, and he also has some technique issues to fix. He might play this season out of necessity, but anyone expecting early solid play from him is likely to be disappointed.