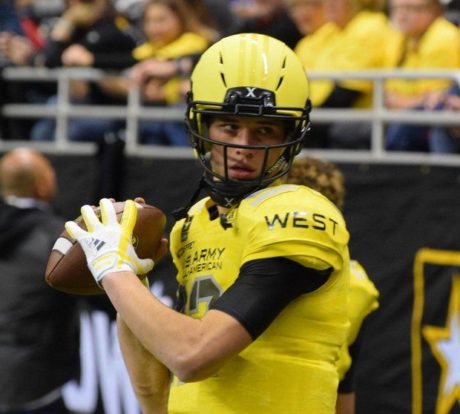 McCaffrey comes from a uniquely athletic family that has been discussed ad nauseam, so I won’t go over all that again. Michigan offered him in February of 2015, and he held off for a while, but he chose the Wolverines in February of 2016. This is nothing new in recruiting, but it’s odd to realize that we’ve been aware of him for over two years now . . . and he’s still almost three months away from starting his first fall practice. Anyway, he put up some good numbers for Valor Christian, led the team to a 10-3 record, and won a state championship without looking like a truly dominant high school player. He played in the U.S. Army All-American Bowl, where he was third on the depth chart; however, he played well in the game, and his place on the depth chart may have been related to missing the first day of practice while receiving an award.

The McCaffrey parents could only be at one son’s big night Thursday. They didn’t choose Dylan, who was at the CO sports HOF. #9Sports pic.twitter.com/WYQleDMqdD

This fall I think McCaffrey will redshirt. McCaffrey has a good deal of physical development to do, including strengthening his upper and lower body, as well as simply adding mass to a 6’5″, 197 lb. frame. Additionally, Michigan has two quarterbacks with starting experience, and the third guy has arguably looked the best during the spring. Unless there are injuries on the level of Maryland’s a few years ago, McCaffrey should be spending this year soaking up everything he can in an attempt to succeed Wilton Speight in a year or two.