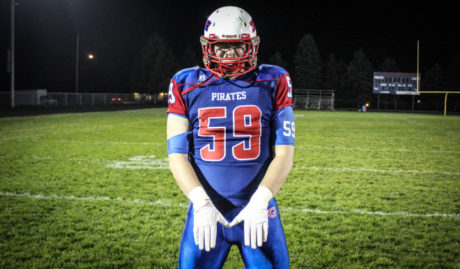 When Honigford committed to Michigan in late June of 2016, three of the four major recruiting sites had him ranked as a 3-star, with ESPN making him a 4-star. I initially gave him a TTB Rating of 82, which I eventually bumped up to 84 (LINK). I even went as far as making Honigford my modern poster boy for the “Scouting Guide: Offensive Tackle” post (LINK).

And now I have to explain why I’m ranking him in the 90’s of the countdown. I have heard that Honigford has bulked up already, but listed at 6’6″ and 278 lbs., I think there’s a lot of mass to add before he sees the field. And that’s not just weight, of course, but also muscle. Mason Cole played as an underweight offensive tackle a few seasons ago, but that’s not ideal, and Cole was more college-ready from a technique standpoint. So while I think Honigford has a great deal of potential, I believe he will redshirt this year unless a plague wipes out a few tackles. The other freshman linemen seem a tad more likely to play based on being slightly more developed at this point.