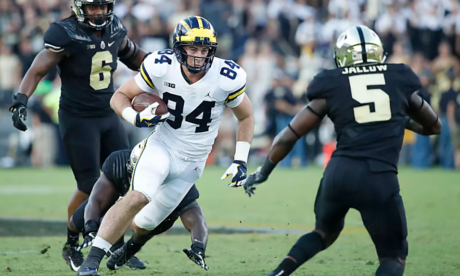 Sean McKeon (image via Land of 10)

I underranked McKeon last season by a good bit. I thought then redshirt junior Ian Bunting would be the starter after Bunting filled in capably for Jake Butt in 2016. I still think Bunting would have been a fine starting tight end, but the coaching staff obviously liked McKeon, who led the team in receptions (31) and touchdown catches (3) while barely finishing #3 in receiving yards (he had 301; team leader Grant Perry had 307). McKeon proved to be a largely reliable tight end. Unfortunately, the coaching staff – particularly Jim Harbaugh – goofed in the Outback Bowl and called for a handoff to McKeon, who promptly fumbled it away; Harbaugh didn’t realize he didn’t have an actual fullback in the game. It wasn’t really McKeon’s fault, but it did leave a slightly bad taste in some fans’ mouths.

Going into the 2018 season, McKeon seems pretty well entrenched as a starting tight end, or at least a heavy contributor. Redshirt junior Zach Gentry should also play quite a bit, and while McKeon has more starts, I think Gentry is the guy who can help create big plays and stretch the field. You don’t find 6’8″ guys who can run like Gentry, but 6’5″ guys who play like McKeon are a little more common. I think I would be a little bit disappointed if McKeon leads the team in receptions again, because that would likely mean that Donovan Peoples-Jones and/or Tarik Black underachieved or got hurt. McKeon might match his numbers from 2017, but he should end up a little farther down on the stat sheet this season.