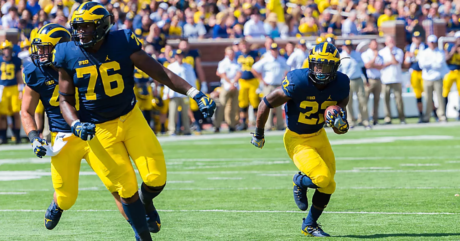 Bushell-Beatty looked like a backup going into 2017, and that was indeed the case to begin the year. Nolan Ulizio started the season at right tackle, and Mason Cole played on the left side. Ulizio struggled mightily, but Michigan stuck with him for the first five games before finally replacing him with Bushell-Beatty. Bushell-Beatty’s run blocking was solid, while his pass protection was subpar. For undisclosed reasons, he was also sent home from bowl preparations and missed the game against South Carolina.

For some reason he’s now lining up at left tackle, where it seems like a guy with poor pass pro skills would be a bad choice. One of the big position battles on the team all spring and going into the fall appears to be Bushell-Beatty vs. redshirt freshman James Hudson III. Hudson has a higher long-term ceiling, but he’s still adjusting to the offensive system after being recruited for defensive tackle. Bushell-Beatty has some versatility to play left tackle and right tackle, and he’s the most experienced guy on the line as the only fifth year senior.