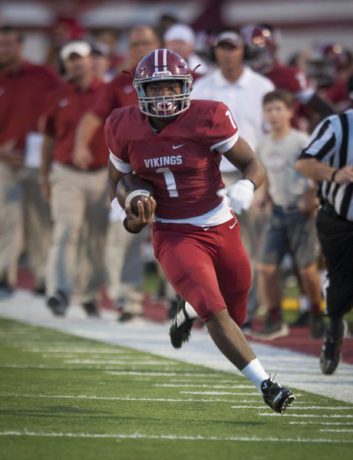 Barrett was the subject of much consternation for Michigan fans, for one reason or another. One reason was that he was not highly rated (3-star, #61 ATH, #753 overall). Another was that some teams were recruiting him as an option quarterback. You can see from his stats above that he wasn’t a bad QB in high school. Barrett didn’t end up committing to Michigan until late in January, and he was a nice consolation prize from the state of Georgia once the dust settled from Otis Reese’s flipping to Georgia.

I don’t know what to think of Barrett, exactly. He’s a wild card. Michigan reportedly plans to start him out at slot receiver, but you don’t often see 6’0″, 215 lb. slot receivers. I wouldn’t mind if the staff got creative (for them) and used him on bubble screens to get him going downhill against smaller defensive backs, but this coaching staff hasn’t used a ton of bubble screens during its tenure. Maybe the presence of Patterson with his running capability will open up some more zone read/bubble opportunities. There’s also the chance that Barrett could be used as a “wildcat” quarterback, but that’s not as much of a change-up with Patterson under center than it would be if, say, Brandon Peters or Dylan McCaffrey is the starting QB. I like Barrett as a player, but it’s unclear right now where he’ll play.