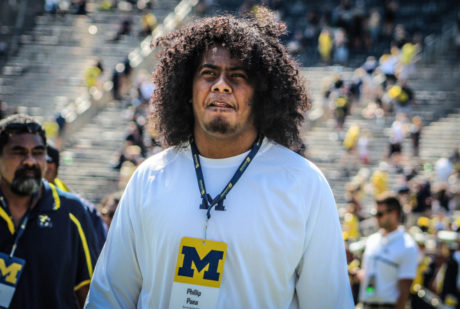 Paea looked to me like an offensive guard coming out of high school, and instead he’s hanging out at defensive tackle. On the one hand, Michigan doesn’t have a ton of depth at nose tackle, which is where Paea might be able to make an impact. The Wolverines have a pretty good combo of Bryan Mone, Aubrey Solomon, and Michael Dwumfour they can roll out at nose tackle and 3-tech. Otherwise, it’s a crap shoot to see who will play on the interior of the line, whether it’s Paea, Deron Irving-Bey, Donovan Jeter, or others. I have heard the least hype about Paea and believe he has the furthest to go of the interior linemen. He’s probably at least a year away from playing a significant role.

UPDATE: Commenters are saying Paea has already moved to offensive guard, which I had heard from one random message board poster on another site but hadn’t seen confirmed. As you can tell from my post above, hooray! I still wouldn’t expect him to play much this season.