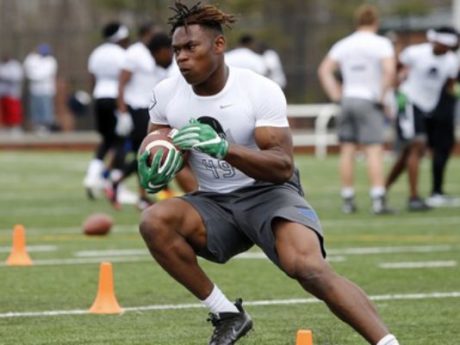 Turner confuzzled some Michigan recruiting fanatics when he committed in April of 2017. He was a generic 3-star running back with decent offers (Miami, Notre Dame, Wisconsin) but not a whole lot of recruiting hype. Michigan snatched him when a lot of people thought he would be committing to the Fighting Irish, so that was the silver lining to an otherwise uninspiring recruiting victory. Even his high school production is solid, but nothing spectacular.

But going into the 2018 season, I keep hearing that Michigan thinks they found a bit of a hidden gem in Turner. I have heard that they expect him to play this year, likely as a third-down back. Turner did a nice job catching a screen pass in the International Bowl and has decent speed, and if he can be a decent pass blocker, that would be great. I think finding high schoolers who are ready to handle college pass protections can be an iffy proposition, but if the coaching staff thinks he has the mental and physical capabilities to be a solid blocker, then hooray – because Karan Higdon and Chris Evans haven’t been great in that area. Either way, I don’t imagine Turner as a huge step up over the non-Higdon and non-Evans options, so I’m still placing him fairly low in the countdown.