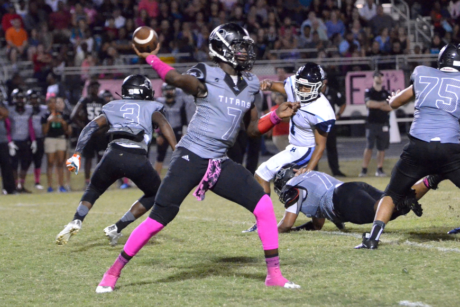 The quarterback position is a unique one in many ways, and one reason in college football is this: a whole year of recruiting goes by, and most schools only take one QB. So when you’re The Guy in any given class, the eyes of the world (in this case, the Michigan sphere plus some others) are upon you. There are only a few people who care about NFL quarterbacks once they drop past the second round or so, but every school gets a guy who is The Future. The current guy can’t get it done, but watch out for this rocket-armed, scrambly, laser-guided-missile dude we got out of Nowhere, Kentucky.

For Michigan in 2018, Nowhere, Kentucky is actually Olympia High School in Florida. And the rocket-armed, scrambly guy is an M1-A1 Abrams melted down and poured into the mold of a 6’5″, 220 lb. cyborg. Central casting in Hollywood ain’t got nothin’ on Joe Milton.

The problem is that, unlike Hollywood, Michigan only gets so many takes before errant passes turn into losses and the director gets fired. Milton never completed more than 50% of his passes in any of his three seasons as the varsity starter at Olympia, and his 10-to-6 TD-to-INT ratio isn’t very impressive for a guy headed to major college football. Reasons for this poor completion percentage range from “He’s flat-out inaccurate” to “He throws the ball too hard for his guys to catch” to “He doesn’t have a good supporting cast.” What’s the real answer, and does it matter? He’s on campus now, and Michigan has to make the best of it.

Aside from the bazooka attached to his right clavicle, Milton can run a little bit (rumors are he ran a 4.6 forty, though others say his fastest time is a 4.8). He’s also reported to be a Leader with a capital “L.” That leadership thing is something that has never been uttered about Brandon Peters, the guy who could be around for the next three years and has more snaps in a Michigan uniform than anybody else on the roster (hint: the other guys have zero combined). Ole Miss transfer Shea Patterson might be a leader, but he might also be a one-year rental.

Will Milton play this year, or will he redshirt? Odds are he’ll stay on the sideline. Patterson will start unless something bizarre happens, and the backup role appears to be pretty neck-and-neck between Peters and redshirt freshman Dylan McCaffrey. The coaching staff seems to be high on Milton, but he’s unlikely to make the leap necessary to surpass those other guys in year one. I’m putting him here on the countdown, because he might be a valuable scout team quarterback, and you never know what will happen if injuries or bad attitudes infect the guys ahead of him on the depth chart.

But if you’re driving down Main Street one Saturday afternoon this fall and see a brown, oblong projectile headed for your windshield, this isn’t your Donnie Darko moment. It’s just that 52.1% of the time, the ball ends up in some unexpected places.