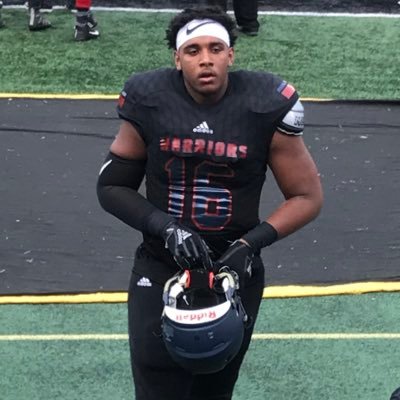 Bryce Austin – DT – Southfield (MI) A&T: Austin is a 6’2″, 280 lb. prospect with offers from Boston College, Michigan State, Missouri, and Pitt, among others. He’s a 247 Sports 3-star, the #22 defensive tackle, and #314 overall. He visited Ann Arbor last weekend and was given the offer while on campus. He’s a teammate of 2020 quarterback Anthony Romphf, whom Michigan offered a couple weeks ago.

Cullen Coleman – DE – Rye (NY) Country Day: Coleman is a 6’3″, 220-pounder with offers from Baylor, Notre Dame, UMass, and some Ivy League programs. He plays a variety of positions for his high school team (RB, FB, LB, etc.), but with his build, I believe he will eventually grow into a weakside end.

Antonio Doyle, Jr. – LB – Hazelwood (MO) Lutheran North: Doyle is a 6’4″, 230 lb. prospect with offers from Missouri, Nebraska, and Oklahoma State, among others. He’s a 3-star, the #41 outside linebacker, and #502 overall. Despite having the size of a defensive end, he moves well and could keep his hand up at the next level, depending on what type of system he plays in.

Ty Hamilton – DE – Pickerington (OH) Central: Hamilton is a 6’3″, 250-pounder with offers from Kentucky and a bunch of MAC schools. He’s a 247 Sports 3-star, the #38 strongside end, and #821 overall. He attends the alma mater of former Michigan defensive end Taco Charlton.

Devin Hightower – LB – Akron (OH) Hoban: Hightower is a 6’2″, 205 lb. prospect with no other offers at this time. He transferred from Lakewood (OH) St. Edward prior to his junior year, so he went from being a teammate of Quintel Kent (and Caden Kolesar and Jordan Castleberry) to being a teammate of Nolan Rumler.

Nikhai Hill-Green – LB – Pittsburgh (PA) North Catholic: Hill-Green is a 6’1″, 208-pounder with offers from Boston College, Vanderbilt, and a bunch of MAC programs. He’s a 4-star, the #26 outside linebacker, and #338 overall.

Jaylan Jeffers – OT – Scottsdale (AZ) Saguaro: Jeffers is a 6’6″, 260 lb. prospect with offers from Arizona, Arizona State, and Oregon, among others. He’s a 3-star, the #83 offensive tackle, and #818 overall. He’s a teammate of 2020 cornerback Kelee Ringo and linebacker Damian Sellers.

Keontae Jenkins – CB – Virginia Beach (VA) Cox: Jenkins is a 5’10”, 165-pounder with offers from Auburn, Florida, Florida State, Georgia, Penn State, and Virginia Tech, among others. He’s a 4-star, the #20 cornerback, and #232 overall. Michigan has really struggled to successfully recruit the Virginia Beach area, despite all the elite talent that comes from the region, so while Jenkins looks like an excellent corner, I don’t expect anything to come from it.

Mordecai McDaniel – CB – Washington (DC) St. John’s: McDaniel is a 6’3″, 187-pounder with offers from LSU, Maryland, and Penn State, among others. He’s a 3-star, the #87 wide receiver, and #446 overall. He could play wide receiver, cornerback, or safety at the next level. He was a teammate of 2019 Michigan commit Quinten Johnson. His highlights are full of him destroying opponents on special teams.

Emanuel “Manny” Rogers – DT – Jensen Beach (FL) Jensen Beach: Rogers is a 6’5″, 300-pounder who also has an offer from LSU. He reminds me a little bit of William Campbell, even though he has yet to be ranked and doesn’t have many offers. I think there’s a possibility that his best future may be on the offensive line.

Kevin Swint – LB – Carrollton (GA) Carrollton: Swint committed to Clemson. He’s a 4-star, the #9 outside linebacker, and #195 overall. Clemson is #9 overall in the 2020 team recruiting rankings.