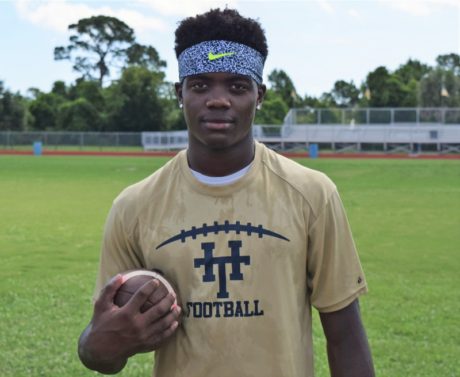 Pick the score of the men’s basketball game vs. Oklahoma for a chance at an Amazon gift card (LINK).

Melbourne (FL) Holy Trinity Episcopal running back Jashaun Corbin was offered by Michigan. He’s a 6’0″, 191 lb. prospect with offers from Florida, Florida State, North Carolina, and Oregon, among others. He’s a 3-star, the #41 running back, and #700 overall. As a junior in 2017, he had 107 carries for 1,022 yards and 11 touchdowns; he also had 25 catches for 619 yards and 7 touchdowns. Corbin actually looks like a decent prospect, but if you watch his highlights, I’m not promising good football. Small crowds, lollygagging, and such will ensue.

Frisco (TX) Wakeland offensive tackle Rafiti Ghirmai was offered by Michigan. Ghirmai is a 6’4″, 290-pounder with offers from Alabama, Baylor, Florida, Georgia, Oregon, TCU, and Texas, among others. He’s a 3-star, the #26 offensive tackle, and #358 overall. He looks like he might be a guard at the next level.

Stockbridge (GA) Woodland offensive tackle James Ohonba was offered by Michigan. He’s a 6’5″, 350 lb. prospect with offers from Alabama, Clemson, Georgia, Notre Dame, and Ohio State, among others. He’s a 4-star, the #20 offensive tackle, and #264 overall. He’s a big, burly lineman who looks like he too might end up playing offensive guard in college, since he doesn’t move extremely well at 350.

Ft. Lauderdale (FL) American Heritage wide receiver Anthony Schwartz was offered by Michigan. He’s a 6’0″, 172 lb. prospect with offers from Auburn, Florida, Miami, Nebraska, and Oregon, plus others. He’s a 3-star, the #71 wide receiver, and #411 overall. He claims a 4.31 forty, and he notched a 10.82 in the 100 meters. More known for his speed at this point, he’s not extremely polished as a wideout. 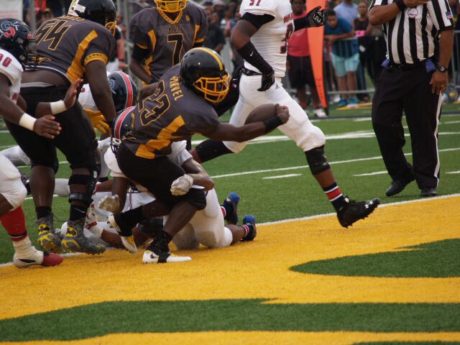 Marvin Grant, Jr. (image via Sports Q and A)

Detroit (MI) King safety Marvin Grant, Jr. was offered by Michigan. He’s a 6’1″, 175 lb. prospect with offers from Iowa and Toledo. He nabbed the Michigan offer when he took a visit to campus with teammate Tyrece Woods, a linebacker. Michigan landed a player from King in each of the last two classes, Lavert Hill in 2016 and Ambry Thomas in 2017. Grant’s first highlight is a leaping, one-handed interception:

Orion (IL) Orion tight end Logan Lee was offered by Michigan. He’s a 6’5″, 225 lb. prospect with an offer from Iowa. He’s a traditional tight end who’s not supremely athletic but is a good blocker; he could also play defensive end in college.

Largo (FL) Largo defensive end Jaquaze Sorrells, a Florida commit, was offered by Michigan. Sorrells is 6’3″, 256 lbs. He selected the Gators in June of 2016. While National Signing Day 2019 is a long way away, it will be difficult to flip a kid who’s committed to his home-state school already.

Largo (FL) Largo running back Jayion McCluster was offered by Michigan. He’s a 6’1″, 175 lb. ball carrier whose first offer is from the Wolverines. He’s the cousin of former Ole Miss running back Dexter McCluster, who has spent time with the Chiefs, Titans, and Chargers.

Stone Mountain (GA) Stephenson offensive guard Jalil Irvin committed to Michigan. You may remember that he was committed to Michigan (LINK) and then he wasn’t (LINK). He actually visited Michigan not long ago, but the coaching staff was not pursuing him anymore and he made the decision shortly thereafter to become a Tiger.

Michigan was named to an array of top lists for 2018 prospects in the past week:

Clemson offensive tackle Jake Fruhmorgen, who decided to transfer after the 2016 season, is headed to Florida. So that takes another name off the list of potential help for the offensive line.