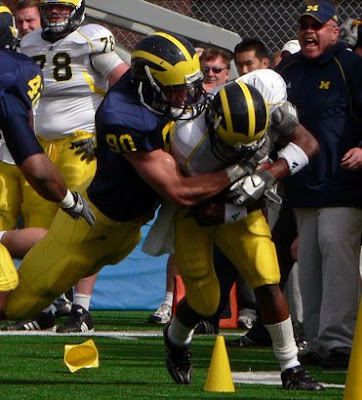 Defensive end Anthony Lalota has been released from his scholarship to the University of Michigan. The 6’4″, 270 lb. lineman committed to Michigan from The Hun School in Princeton, New Jersey. Buried on the depth chart behind redshirt junior Ryan Van Bergen, true freshman Jibreel Black, and converted tight end Steve Watson, the redshirt freshman apparently gave up on seeing the field and asked for his release.

Lalota came to Michigan as part of the Class of 2009. He was a late addition to the football program at The Hun School, having only started to play as a junior. He played offensive tackle and defensive end in high school, and Scout had him ranked as a 4-star offensive tackle prospect at one point. Despite being listed by recruiting sites as big as 6’6″ and 260 lbs., he measured in at 6’4″, 235 lbs. prior to his true freshman season. He added 35 lbs. in between his freshman season and redshirt freshman season, but the writing appeared to be on the wall by the time the 2010 season rolled around. When you’re fourth on the depth chart at a position lacking depth, it would be frustrating.

For what it’s worth, I’ve never been a fan of Lalota’s game. My analysis of him after his participation in the Army All-American Game in January 2009 went like this:

I am not very impressed by Lalota’s skills. He’s a recent convert to football, having not played until his junior year of high school. So significant improvement may still be forthcoming. However, he is very raw as a defensive end and usually tries to beat offensive tackles by bull rushing with 100% effort. I love the effort and that hard work could turn him into a very good player, but at 6’6″ and 260 lbs., he reminds me of former Michigan player Pat Massey, which is generally not considered to be a good thing by Michigan fans. As far as I saw, he didn’t make any plays in the game, and I wouldn’t expect him to play significantly at Michigan for at least a couple years.

Lalota was very mechanical coming out of high school. He played defensive end like an offensive tackle. His lateral mobility was virtually nil, and he lacked great football instincts. I actually would have liked him more for a 3-3-5 defense than I did for the 4-front that Michigan employed at the time he was recruited. Regardless, he seemed overrated to me as a high 4-star prospect. Like many football recruits, the services looked at his size (which was obviously exaggerated) and his decent straight-line speed and said, “Hey, this guy is going to be good.” They just didn’t account for the fact that football is a sport played by athletes, not just big dudes who happen to not be crippled.

As for the impact of Lalota’s transfer on the team itself, it once again hurts Michigan’s APR (just like Vladimir Emilien . . . and Austin White . . . and Justin Turner . . . and numerous others). The number of guys transferring out of the University of Michigan borders on ridiculous. No, wait – it is ridiculous. Michigan was nearing the danger line prior to the season. Since then, four additional guys have left the team. I once again have to point out that I’m not impressed with Rich Rodriguez’s retention rate. Many of these guys don’t seem to be giving the football program much of a shot at Michigan before bailing out. I understand being frustrated about playing time, but he’s a redshirt freshman. What liar told him he would be able to start for a Big Ten team by his second year in college? Whoever that liar is, I hope Anthony Lalota doesn’t trust him anymore.

Meanwhile, Michigan’s Class of 2011 just went from 18 to a size of 19. Guys like Anthony Zettel, Deion Barnes, James Adeyanju, and Ray Drew could take Lalota’s spot. Michigan already needed one defensive end in the class. Since both Van Bergen and Watson are redshirt juniors (and Watson might be a longshot to return for a fifth year), I expect Michigan to take at least one more defensive end in the class, maybe two.