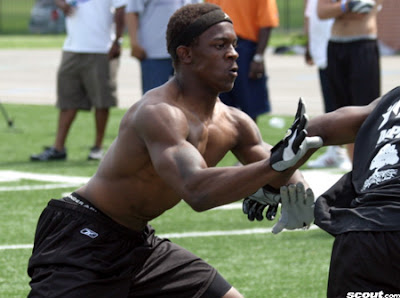 Let’s see more of this guy on offense . . . Michael Cox. I know I sound like a broken record, and it doesn’t bode well for me (or him) that Cox hasn’t seen the field in the first two games. However, Michigan’s runnings backs just aren’t getting it done. So far Michigan’s three running backs (Vincent Smith, Michael Shaw, Stephen Hopkins) have combined for 42 carries, 129 yards, and 2 touchdowns (a 3.07 yard average). I really don’t care who totes the rock for Michigan, as long as he runs the ball at a better clip than 3.07 yards per try.

Let’s see less of this guy on offense . . . Denard Robinson. Hold on just a second before you go ballistic, though. I don’t want him to be relegated to the bench (unless the game is out of hand). I’d just like to see him carrying the ball less. He’s averaging 8.0 yards per carry, but he’s averaging 28.5 attempts per game. That would be 370.5 carries in a 13-game season, and that’s way too much. Hopefully Robinson can get a bit of rest in the next two weeks against UMass and Bowling Green. Robinson might be the best player in the country right now, and he needs to stay healthy.

Let’s see more of this guy on defense . . . Thomas Gordon. True freshman Carvin Johnson won the starting Spur job in fall camp, but Gordon played pretty well against Notre Dame in his first career start, as Johnson missed the game due to a knee injury. Gordon was the fouth-leading tackler against the Fighting Irish, tallying 5 stops, 2 tackles for loss, and Michigan’s lone quarterback sack. I think he’s stronger at the point of attack than Johnson, and while the freshman is probably more athletic, my bigger concern at the position is the ability to stand up to blocks and tackle. Gordon seems to do those things better than Johnson, from what I’ve seen.

Let’s see less of this guy on defense . . . Craig Roh at defensive end. I think this was a game plan adjustment for Michigan’s coaches, and the results were questionable. In order to counter Notre Dame’s passing game, Michigan put elite pass rusher Roh on the field instead of the solid but unspectacular Greg Banks. However, Roh was overpowered repeatedly, and despite getting a decent rush at times, he was unable to take down the quarterback. If Michigan goes with a 4-front, then I’ll be happy to see Roh lined up at defensive end. But in a 3-3-5 defense, he lacked the strength to stand up to the two blockers that usually stood in his way.

MVP of the Notre Dame game . . . Denard Robinson, obviously. He had 258 rushing yards, 244 rushing yards, and 3 touchdowns (2 rushing, 1 passing). He also led the game-winning drive, on which he was 5/6 passing and ran for 17 yards, including scoring the final TD.

Unsung Hero of the Notre Dame game . . . Zac Johnson. Rasheed Furrha and Johnson share the #36 jersey according to the official roster, and the official site lists Furrha as the player who participated in Saturday’s game. However, I distinctly remember seeing Z. JOHNSON on the back of #36’s jersey, so I’m assuming that was a typo on the website. Regardless, Johnson had 2 special teams tackles and continued the solid special teams coverage he’s shown for the past couple years. He also made a smart play on the punt return unit, grabbing a ball on the bounce that appeared to have hit a Michigan player (although I don’t think it did). Johnson saw the ball bounce, plucked it out of the air, and fell to the ground, eliminating any chance for a Notre Dame player to recover.