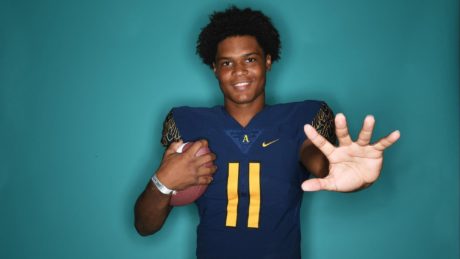 Fort Lauderdale (FL) Saint Thomas Aquinas linebacker Anthony Solomon flipped from Miami to Michigan. This was a commitment long in the making, though it was just made public on Sunday evening. Aside from the Hurricanes, Solomon also had offers from Alabama, Clemson, Florida, Florida State, Georgia, Ohio State, and Oklahoma, among others.

Hit the jump for more on Solomon’s commitment.

Michigan has been pursuing Solomon for a long time, and I recently found it odd when I noticed that I started writing about Solomon back in the fall of 2015. He was considered to be a heavy Michigan lean at one point, and Michigan fans had enough time to forget about him while a commitment to Miami took place, and then he popped back up on the radar in the past few weeks with news that he was going to take an official visit. That visit took place this weekend. He was actually expected to make his flip public earlier, but it did not take place until the visit was completed.

Solomon, who is expected to play Viper, has the body of a safety. He has not grown much over the past couple years, so he appears to have maxed out his height and hasn’t thickened up a ton. Solomon plays low, shows good change-of-direction skills, and attacks downhill. He plays with confidence and has some of the same mannerisms as Jabrill Peppers on the field. He takes good angles, can cover backs out of the backfield, and shows good ball awareness.

Solomon’s size is adequate for the position of Viper, but he will have to bulk up to play that spot, and he will have a more significant amount of weight to add if he ends up playing weakside linebacker. Solomon is an excellent blitzer, but I think he could improve his play recognition skills, as well.

Overall, I think Solomon should fit in very well with Michigan’s defense, where he can be used as a blitzer and cover guy. He’s not as fast as his two predecessors at Viper (Peppers and Khaleke Hudson), but he’s not far off from Hudson. Hudson’s experience playing safety in high school may also put Solomon a step behind in the versatility department, but I think Solomon can play the role of that hybrid space-playing SAM linebacker.

Michigan now has 25 commitments in the 2019 class. Solomon is the fourth commit from Florida in this class alone, joining cornerback D.J. Turner II, wide receiver George Johnson III, and defensive lineman Michael Morris. Michigan – and virtually every other school – has recruited St. Thomas Aquinas heavily over the years, but it has not often been fruitful (quarterbacks Jake Rudock and John O’Korn both went to STA but transferred from Iowa and Houston, respectively).