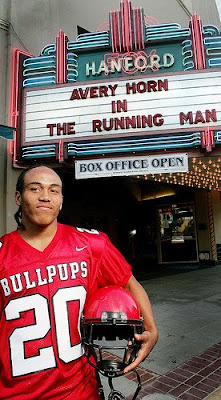 Avery Horn, a Californa kid who just finished his redshirt freshman season at Michigan, has decided to transfer to a school closer to home. Horn was a smallish running back recruited by Lloyd Carr, but he was probably destined to spend most of his career sitting on the bench except for an occasional kickoff return. Horn returned five kickoffs in 2008 for 108 yards, but he didn’t see a single offensive snap.
I was actually somewhat excited to see Horn play in the spread option offense. He’s fast and quick, but rumors out of practices suggested that he was slow to pick up the offense. With Kevin Grady, Brandon Minor, and Carlos Brown scheduled to run out of eligibility after 2009, Horn might have earned some playing time for 2010 and 2011. But when a kid is such a long way from home and not sniffing the field, I suppose that can get pretty depressing.
No indication has been given of what school Horn will attend. If he transfers to another FBS school, he’ll have to sit out the 2009 season and then he’ll have two years of eligibility remaining. I don’t think Horn will ever make it to the NFL, but I wouldn’t be surprised to see him putting up decent numbers for a WAC team or even a Pac-10 team in the next couple years.