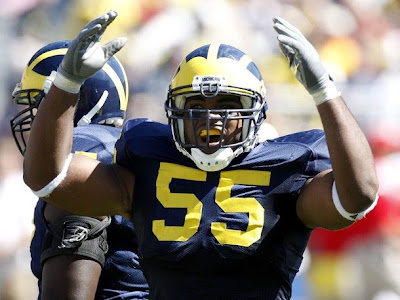 After the season, we said that, ‘you can’t be up for so long, eventually you have to pay taxes,’ ” Graham said on Saturday. “That’s how we look at it until we get it back up. That’s what we’re going to do. I hope them boys get right next year. Because coach (Rich Rodriguez has) only got one more year — if they don’t do (anything). Because of the allegations, and then, if you have a bad year, then you’ve got to get someone new.

I’m not surprised because I know what happened, and I know what kind of rules were broken. I couldn’t see how they were going to get out of that. Whatever steps need to be taken (to restore Michigan’s winning tradition), I’m all for it. What is happening right now obviously is not working. I don’t know how long they’re going to let this last until changes are made. This year is going to be the tell-all what’s going to happen. We can’t have three losing years in a row. Not at Michigan. To lose seven of last eight games (in 2009) is an embarrassment.

Representative of the Michigan online community, MGoBlog responded to Brandon Graham’s statements with, “[These comments] don’t say anything about Rodriguez, really. They say something about the guy offering the quote. Brandon Graham, as per usual, is win.”

Compare this to MGoBlog’s statement that, “The obvious contrast is with Morgan Trent, who sold out the program in a statement. He’s just talking out of his ass because he dislikes RR, and I hereby excommunicate him.”

My intention here is not to accost Brian, MGoBlog’s originator. But since he’s a knowledgeable Michigan fan, and someone other Michigan fans look to for leadership, his sentiments are echoed by many fans. These two statements are remarkably similar; the only significant difference lies within Trent’s opening statement that “I know what happened, and I know what kind of rules were broken.” And since the allegations told us all “what happened” and “what kind of rules were broken,” I don’t see how Trent’s re-statement of public knowledge could possibly be damning.

My intention here is also not to attack Brandon Graham. What he said is probably accurate – this very well could be a do-or-die year for Rodriguez at Michigan. But the disparate reactions to each player’s statement lie not in what was said, but who said it. As a likely first round draft pick this year, Graham has been afforded more leeway. He is our hero, so he can say anything he wants. Trent, on the other hand, had an up-and-down career and didn’t get picked up until the sixth round of the 2009 draft; therefore, Michigan fans felt compelled to denigrate him in various uncouth ways.

This is nothing new. Talented and respected people get more slack. This is why Hollywood actors never serve time for domestic abuse or drug possession. It’s why it was such a huge deal that New York mayor Michael Bloomberg *gasp* wanted criminal mastermind Plaxico Burress prosecuted to the full extent of the law for possessing a weapon illegally. In many instances, someone like Burress would get slapped on his left wrist while signing an autograph for the judge with his right hand.

But let’s call a spade a spade – either Graham and Trent were wrong to say what they did, or neither statement was a big deal. I don’t have a problem with either statement.