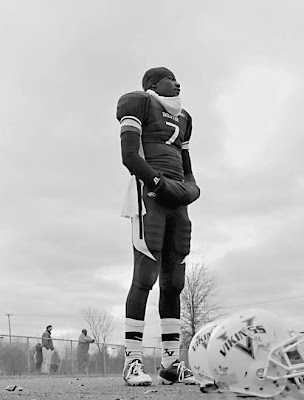 In the middle of the third quarter, during a 30-10 Michigan victory over UConn, quarterback Denard Robinson took off up the middle on one of his 29 carries. As he stretched for a first down, a defender put his helmet on Robinson’s left hip, Shoelace flew up in the air and landed on his left hip, and then a large Husky landed on Robinson’s right hip, driving his left hip harder into the ground. As Robinson squirmed in pain on the ground, Michigan fans’ hearts leapt to their throats.

Now imagine if you didn’t see the game or read the internet yesterday. If you were Coach Rich Rodriguez and forced to sub for Robinson, would you insert . . .

a) a sophomore who has 12 games of starting experience, 5 career victories as a starter, and 2,000+ yards passing to go along with 16 career touchdowns?

b) a freshman who has 0 games of starting experience, 0 career victories as a starter, no stats, and an opportunity to redshirt in order to preserve eligibility through 2014?

An objective reader would clearly choose letter “A.” Not Rodriguez, though. Despite surely knowing that Robinson’s injury was only minor and that he would probably be able to return to the game soon, Rodriguez left option “A” on the bench and told “B” to warm up.

Earlier in the week, Rodriguez told the media that Gardner probably wouldn’t redshirt in 2010. He had apparently soaked up the playbook and shown excellent leadership since his arrival on campus in January 2010. Meanwhile, Forcier’s leadership had been questioned repeatedly, most notably by Rodriguez and his coaching staff, who chose to force Tate to “earn his wings” at the beginning of fall practice; several student-athletes who hadn’t worked very hard in the offseason were given plain blue helmets and told they had to work to get them back.

Leaving Forcier on the bench was apparently the punishment levied for poor offseason habits. He was essentially suspended for the game. And while Forcier had been standing on the sidelines with his teammates up to that point, afterward the television cameras caught him sitting alone on the bench with towels wrapped around his face, clearly unhappy with the situation. It was not a mature moment from Forcier (why sulk away from your teammates during a 30-10 opening day victory?), but the cameras and broadcasters focused on him for entirely too long. I can’t say that I blame Forcier for being upset. I was, too. He shouldn’t have wandered off by himself and covered his head during a win, but he’s just barely 20 years old; expecting a 20-year-old to be great at hiding his emotions is asking a lot.

However, the choice by Rodriguez was questionable, perhaps even irresponsible and narrow-minded. For such a minor injury, it bordered on the ridiculous to send Gardner onto the field. An All-Everything recruit, he will now be unable to play in 2014, even if Michigan needs him. The only Michigan quarterback scheduled to be on the roster by then is Kevin Sousa . . . who is currently playing his senior year of high school and won’t sign a Letter of Intent until February 2011. And now Michigan has three excellent quarterback recruits spread over only two classes of eligibility. If everything remains as scheduled, Forcier and Robinson will continue the quarterback battle/drama through 2012, then Gardner will be the unquestioned starter in 2013, and who knows after that? Furthmore, it’s not so much the fact that Gardner burned his redshirt that frustrates me. It’s the way it was burned, for a mere two snaps, neither of which was critical.

And while coaches repeat the mantras “There’s no I in team” and “No one person is bigger than the program,” Rodriguez seemed to make this statement: “Doing things my way is bigger than the program.” It was punishment enough for 12-game starter Forcier that he didn’t start and was relegated to relief duty on Saturday. Plugging in Gardner for a mere two plays (a handoff and an awkward -4 yard keeper) was a virtual slap in the face. It said, “I’d rather sacrifice having a potential All-American quarterback in 2014 than put you in the game for two snaps.”

After the game the only quote Forcier permitted was “All you need to know is I’m out.” Family members quickly asserted that, No no no, he was just saying that he was leaving the stadium! Yeah, right. If those were the actual words that came out Forcier’s mouth, he’s either a very poor communicator or he had at least momentarily decided to transfer. Just like putting the towels on his head in front of camera feeds being broadcast nationally – and 113,000 fans – Forcier almost surely knew what message he was sending. It may have been an emotional reaction in the heat of the moment, but it was his reaction nonetheless. Whether Forcier actually departs remains to be seen, but it’s growing increasingly obvious that something has to give. Robinson is the starter but could play other positions. Gardner is apparently the #2, but he’s only a year behind Robinson. Forcier seems to be the odd man out and doesn’t have the ability to play another position, but he’s got the best resume so far. For one of the three, a change of positions or a transfer seems more likely today than it did prior to yesterday’s game.

The story/rumors of Forcier’s impending transfer highlighted what seems to be one of Rodriguez’s faults. Several Lloyd Carr-recruited players transferred away from Michigan after Rodriguez arrived, as well as several players who were recruited to Michigan by Rodriguez himself. Two players (Austin White and Justin Turner) have already transferred during fall camp. Forcier was a Rodriguez-only recruit. Hopefully he can manage Forcier’s personality and mold him into a good teammate and leader. But if these attitude issues continue and/or Forcier transfers, Rodriguez’s ability to recruit and judge character comes into question. Michigan can’t afford to lose too many more players, or else they run the risk of facing sanctions for not graduating enough players. Rich Rodriguez needs to recruit players that he can keep around for years, and he needs to manage the personalities of those he recruits. His my-way-or-the-highway attitude is fine, but only if he recruits players who can handle it.