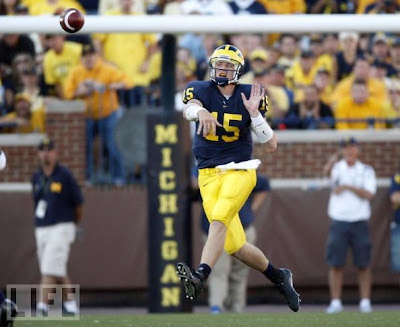 Former Michigan quarterback Ryan Mallett transferred to Arkansas after his freshman season in 2007. He had a stellar redshirt sophomore season in 2009, and he’s in the conversation as a Heisman front-runner in 2010. On Saturday he was 21/24 for 301 yards, 3 touchdowns, and 1 interception against Tennessee Tech.

Honorable mention: Another former Michigan quarterback, Steve Threet, started for Arizona State against Portland State on Saturday. Threet was 14/21 for 239 yards, 2 touchdowns, and 1 interception in a 54-9 victory. He also rushed 3 times for 24 yards.